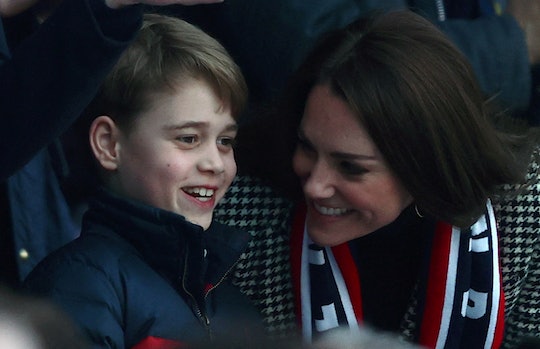 In case this King of England thing doesn’t work out.

Prince George is a future king who is not afraid to get his hands dirty, which is actually totally in keeping with the rest of the royal family. At a recent event in Wales, Kate Middleton told a farmer that her oldest son was given farm chores when he was on his school break. Because future king or not, those farm animals have to get fed.

The Duke and Duchess of Cambridge were in Wales celebrating St. David’s Day on Tuesday, spending time in a goat farm that provides milk for a local cheese shop. When Middleton saw a device that was being used to move feed, as People reported, she told farmer Gary Yeomans, “That was George's job at half term — moving feed.”

Prince William went on to add that he and his family were trying out agroforestry, which is the practice of planting crops between trees to make the soil healthier and give wildlife more food. Apparently, farming is in the family’s blood. At least the Middleton side. “I was looking into my ancestry and there was someone who was a rare breed goat farmer,” the mom of three told the farmers. “I will have to find out which one it was. It was just after the First World War.”

While we don’t know if Middleton is following in her family’s tradition of goat farming, we do know that her kids have chickens at their home of Anmer Hall in Norfolk county. In September 2021, Middleton admitted during a royal engagement that their family had acquired “a lot of animals” during Covid-19 lockdown, and that she believed taking care of animals was “like therapy.” Lucky for 8-year-old Prince George then, to have such therapeutic farm chores to keep him occupied.

Of course, he’s not new to this whole farming thing. In 2020, Prince William told PA Media that his three children, also including 6-year-old Princess Charlotte and 3-year-old Prince Louis, had helped deliver lambs on their school break. “We've been lambing with the children this week. Charlotte wasn't sure at first, but George was straight in there. Louis loves the tractors.”

Maybe when the Cambridges are in Buckingham Palace they’ll turn it into a giant petting zoo and Prince George can be in charge of feeding the animals. What a wondrous thought.