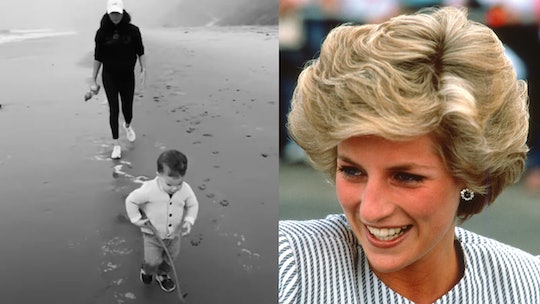 Prince Harry Reveals “Grandma” Was One Of Archie’s First Words

A photo of Princess Diana is hanging in Archie’s nursery.

One of Archie’s first words hit close to home for the Duke of Sussex. Though he never got to meet her, Prince Harry revealed that one of his 2-year-old son's first words was “grandma,” a sweet nod to his late grandmother, Princess Diana.

“I got a photo of her in his nursery, and it was one of the first words that he said — apart from 'mama,' 'papa,' it was then 'grandma'. Grandma Diana," he said in the fifth episode of his Apple TV+ docuseries with Oprah Winfrey The Me You Can't See.

Hearing his son talk about Princess Diana, who was tragically killed in a car crash in Paris in 1997, is worth a thousand words to Harry and the photo in Archie’s nursery is very sentimental to him. “It's the sweetest thing, but at the same time, it makes me really sad because she should be here,” Harry told Winfrey.

The Duke of Sussex also mentioned that he wished his wife, Meghan Markle, could have known his mother and wished “she was around for Archie.” Nonetheless, Harry said he knows his mother would be proud of the man he has become. “Yeah, I have no doubt that my mom would be incredibly proud of me,” he said in the Apple TV+ series. “I'm living the life that she wanted to live for herself, living the life that she wanted us to be able to live.”

Beyond “grandma,” Archie apparently is a little chatterbox these days. Earlier this year, Prince Harry shared on The Late Late Show with James Corden that his son’s first official word was “crocodile.” And during Winfrey’s sit-down interview with Harry and Meghan, who are expecting their second child this summer, the couple revealed that Archie tells people to “hydrate” and “drive safe.”