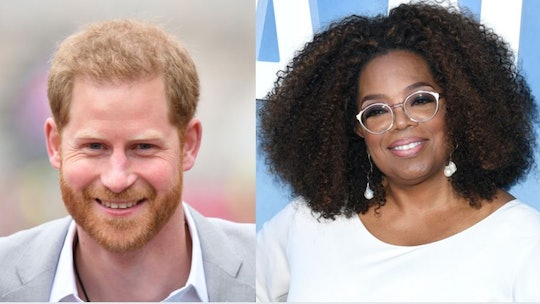 Premiere date, how to stream, and more.

Get ready for another feature with Prince Harry and Oprah Winfrey. But it won’t be like the bombshell one we are still recovering from back in March. This time around, the British royal and media royalty are coming together for a documentary series on mental health. The Me You Can’t See is a multi-part documentary series created and executive produced by Winfrey and the Duke of Sussex, so here’s everything you need to know.

You Can Stream The Me You Can’t See

The duo’s highly-anticipated docu-series will be available to stream on Apple TV+ starting on May 21, during Mental Health Awareness month. The Me You Can’t See will be available on the Apple TV app, which can be downloaded on Apple products as well as select Samsung, LG, Sony, and VIZIO smart TVs. You can also find the app on Amazon Fire TV and Roku devices. An Apple TV+ subscription costs $4.99 a month after a 7-day trial.

Meghan Markle & Archie Make A Quick Cameo In The Trailer

The official trailer unveiled on May 17 shows a quick glimpse of Prince Harry’s wife, Meghan Markle, and their son, 2-year-old Archie, at 2:12. “The results of this year will be felt for decades,” the Duke of Sussex says in the trailer as a clip of his wife and son appear on the screen. “Kids, families, husbands, wives.” The footage is from a video released on Archie’s first birthday of him and Markle reading Duck! Rabbit!.

Markle also pops into the frame at 1:54 as Prince Harry appears to be on a video call.

The Docu-Series Focuses On Mental Health

Featuring conversations guided by Prince Harry and Winfrey, The Me You Can’t See will shine a light on the mental health crisis that plagues millions, something that has personally affected the duke’s family. During their candid CBS interview with Winfrey, Markle revealed she struggled with her mental health and had suicidal thoughts when she was pregnant with Archie. The series is not expected to touch on Markle’s story, but it will feature stories that “help lift the veil on the current state of mental health and emotional well-being.”

“Now more than ever, there is an immediate need to replace the shame surrounding mental health with wisdom, compassion, and honesty,” Winfrey in a press release. “Our series aims to spark that global conversation.”

Stories that will be shared come from around the world and across various cultures, ages, gender, and socioeconomic status.

“We are born into different lives, brought up in different environments, and as a result are exposed to different experiences. But our shared experience is that we are all human,” Prince Harry said in a statement. “The majority of us carry some form of unresolved trauma, loss or grief, which feels — and is — very personal. Yet the last year has shown us that we are all in this together.”

There Will Be Celebrity Appearances

A Mental Health Advisory Board Helped Create The Series

According to Apple, The Me You Can’t See was created in partnership with an advisory board that includes mental health professionals and experts such as the director of Black Thrive Global and the president of the Mental Health Foundation and the National Alliance on Mental Illness (NAMI). A number of the experts will also appear in the docu-series

“My hope is that this series will show there is power in vulnerability, connection in empathy, and strength in honesty,” Prince Harry said.

This article was originally published on May 11, 2021