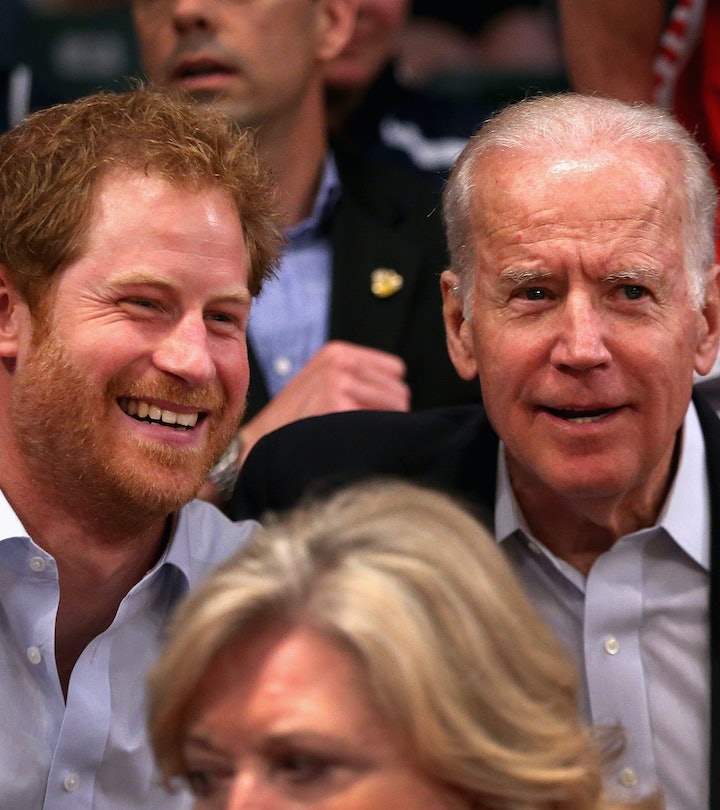 Prince Harry Made A Little Cameo At President Biden's Inauguration

There was a 2013 throwback moment.

President Joe Biden's inauguration was a star-studded event, this we know for sure. Lady Gaga singing the national anthem, almost all of the living presidents on hand to celebrate Biden as he was sworn in to become the 46th President of the United States. John Legend, Jennifer Lopez, the list goes on. Oh, and a member of the royal family. Sort of. Prince Harry was spotted at Biden's Inauguration Day, or at least a picture of the Duke of Sussex was spotted in the background. But still, his longstanding friendship with President Biden and First Lady Dr. Jill Biden surely would have made him a welcome guest in real life anyhow.

On Jan. 20, President Biden and Vice President Kamala Harris visited Arlington Cemetery after they were sworn into office to lay a wreath at the Tomb of the Unknown . There they were joined by three former presidents, Barack Obama, George W. Bush, and Bill Clinton. As President Biden was talking to President Clinton and Secretary of State Hillary Clinton, a photographer caught the moment.

In the background, a photo of Prince Harry could be seen looming large over Biden's shoulder. It was a moment from 2013 when the Duke of Sussex was still in the British Army. He was visiting Arlington Cemetery at the time to lay his own wreath in remembrance.

As royal reporter Omid Scobie put it, it was a "blink-and-you’ll-miss-it cameo."

Prince Harry had a cameo at President Biden's inauguration.

OK, it would have been vastly better if both Prince Harry and his wife Meghan Markle had been there in person. But this will just have to suffice.

Prince Harry has met the president before, of course. During his 2013 tour of the U.S., Prince Harry was introduced to the Obamas, including First Lady Michelle Obama, and the Bidens. He and Dr. Jill Biden reportedly struck up something of a friendship when they reconnected at the first Invictus Games in 2016, at which point her husband even joked that he thought his wife was "spending too much damn time with Prince Harry," according to The Daily Mail.

Maybe royal fans will see Prince Harry spending even more damn time with Dr. Biden now that he has stepped down from his senior royal role and is a private citizen living in Montecito, California with Markle and their son Archie.