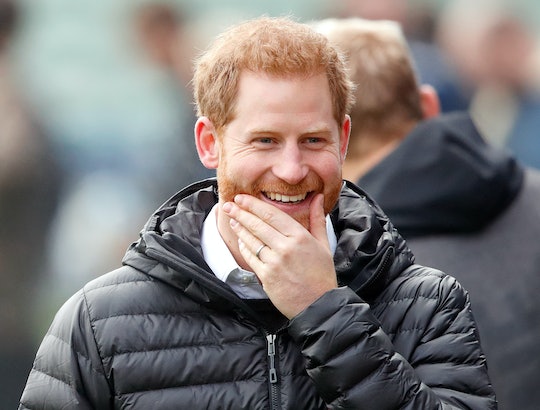 According to one of the royal's new famous neighbors.

It might be hard to picture, but Rob Lowe has reported that Prince Harry might have a ponytail now. Yes, actor Rob Lowe has reported that the Duke of Sussex is rocking a ponytail. The two stars are neighbors in Montecito, California, and Lowe is apparently fairly sure he saw the royal driving around with his hair in a ponytail. Is this where we are now in 2021? What could this possibly mean?

Lowe sat down for a virtual interview on The Late, Late Show with James Corden on Monday and honestly, he could barely contain himself with his new style scoop. After Corden introduced the actor, Lowe immediately told him that he had seen "English treasure" Prince Harry, a new neighbor of his now that he and wife Meghan Markle have moved around one mile away from him in Montecito, California. Lowe told Corden that catching a glimpse of Prince Harry was like seeing "the Loch Ness monster" because sightings have been so rare, so he was excited to see him driving around just minutes before his interview.

As if a mere glimpse of Prince Harry wouldn't be exciting enough, Lowe shared an extra scoop. As he told Corden, "It was very, very quick — don't totally quote me on it — but it looked like he's wearing a ponytail. I'm just saying. It looked to me as a casual observer that his hair had grown very long and was pulled back very tightly by what I can only assume was a ponytail."

A royal prince in real life and not in a Disney cartoon? Can this be true?

Rob Lowe says Prince Harry has a ponytail and we don't know what to believe.

Corden, bless him, did not believe Lowe and told him so immediately, "I'm certain that isn't true. Do you know what I think's happened? I think you didn't see Prince Harry."

While Lowe might not be able to 100% confirm the ponytail sighting, he was able to confirm the Prince Harry sighting since he followed him to the house to see if the car went in."

Fans were quick to pick up on this exciting development, sharing their feelings about the possibility of Prince Harry, a former military man whose red hair has always been fairly close-cropped, walking around California with a ponytail. One royal fan thought Lowe was blowing Prince Harry's cover with his story, "Can we not have Rob Lowe blow his disguise please. Give the man a break to live free, Rob." Another noted that this could be a quarantine look since visiting hair salons are not a great idea right now, "I haven't gone to a salon in almost a year either. You may not have heard - there's a pandemic."

Since Markle and Prince Harry are keeping a low profile these days, we might not get a glimpse of this rumored ponytail. Which is a shame because I'm just dying to see it now.