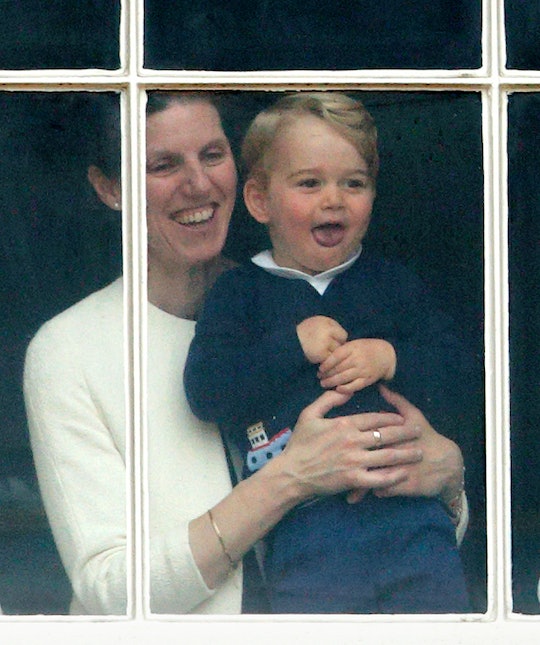 Prince George, Princess Charlotte & Prince Louis' Nanny Doesn't Use This Word With Them

As a professional child care provider who was trained at the exclusive Norland College in Bath, England, it turns out Prince William and Kate Middleton's nanny can't use the word "kids" around her royal charges. So every time a news outlet writes a piece about the "royal kids," it seems we are all getting it wrong. Or at least as far as longtime royal nanny Maria Borrallo is concerned.

The Daily Mirror has reported that it is a longheld policy for all nannies trained at Norland College to avoid using the word "kids" when discussing their charges. Author Louise Heren told the news outlet that she had spent one year at Norland College while she was researching a documentary and discovered that Norland nannies were taught not to use the word "kids," instead opting either for "children" or simply calling them by their names. Heren explained, "The word kid is banned. It's a mark of respect for the children as individuals."

Borrallo has been nanny to the Cambridge children since 7-year-old Prince George was just a few months old. In the years since, she has helped Middleton and Prince William raise 5-year-old Princess Charlotte and 2-year-old Prince Louis as well using the famous Norland nanny methods. Not using the word "kid," as we have now learned, but Norland nannies also avoid yelling or loud voices at all costs. The Norland motto, after all, is "love never faileth," according to Good Housekeeping, and the nannies are encouraged to be as resourceful and engaged as possible with the kids. Whoops. I meant children.

While Borrallo might refrain from using such a common phrase, the Duchess of Cambridge herself has used it on occasion. In a recent virtual meeting with teachers for Children's Mental Health week, for instance, Middleton asked the educators in support of Place2Be on Instagram, "How are the kids doing?" I feel certain Maria Borrallo let that faux pas slide since Middleton is the future queen and everything.

Besides, Kate Middleton does seem to err on the side of casual when it comes to raising her children, and it stands to reason that her nanny is part of that. The Duchess of Cambridge has been homeschooling her kids at her country home of Anmer Hall during the COVID-19 lockdown, even going so far as to take on the role of hairdresser to her little ones.

Little ones she might refer to as her kids, or as her children, or by their names. Who can know for sure other than Maria Borrallo, nanny to the royals.