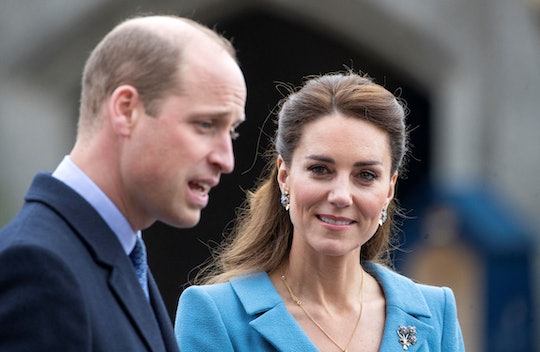 And a sweet throwback with Prince Philip!

While it’s hard to imagine the Duke of Cambridge spending Father’s Day grilling out back and relaxing with a nice cold beer, the royal family did give a little glimpse into their celebrations. In honor of Father’s Day this year, Kate Middleton and Prince William shared a short video on Instagram featuring never-before-seen photos of the fathers in their lives.

On Sunday, the couple posted a sweet little video of a cork board with the words “Happy Father’s Day” pinned to it, surrounded by some family photos throughout the years. In one photo, a young Prince William can be seen with his dad, Prince Charles, and younger brother, Prince Harry, laying down on the ground. In the next, Kate Middleton’s dad, Michael Middleton, walks her down the aisle at her 2011 wedding to Prince William.

But they didn’t just pay tribute to their own father’s. In one never-seen-before photo from the 2019 Trooping the Colour, Prince William holds his youngest son, Prince Louis, while his two oldest children, Prince George and Princess Charlotte. In another, Prince William’s late grandfather, Prince Philip, can be seen surrounded by seven of his great-grandchildren in a photo taken at Balmoral Castle in 2018.

“Wishing fathers everywhere a happy Father’s Day,” the Duke and Duchess of Cambridge captioned the video.

Prince William seemed to have a lot of fun when it came time to celebrating Father’s Day in 2021 with his three kids — 7-year-old son, Prince George, 6-year-old daughter, Princess Charlotte, and 3-year-old son, Prince Louis. On Father’s Day, which landed just one day before his 39th birthday, Prince William and his two oldest kids helped kicked off a half-marathon at Queen Elizabeth’s Sandringham Estate, according to People.

Prince William spent the rest of his Father’s Day by celebrating in private, where he was joined by his wife and youngest son, Prince Louis, according to Hello! Magazine. While it’s unclear, exactly, what their celebration entailed, it’s safe to assume that he was surrounded by so much love from his family.