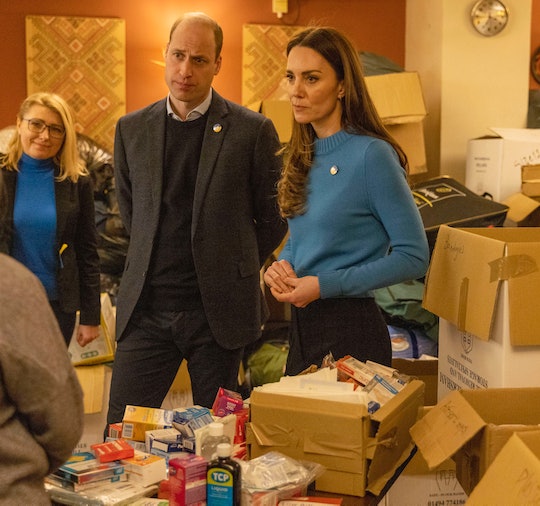 The dad of three said that Prince George, Princess Charlotte, and Prince Louis “have been coming home asking all about it.”

It’s a parent’s job to help their child understand the world around around them, but it’s not an easy task when that world is filled with violence. With the war in Ukraine, moms and dads all over the world are trying to find the right words to explain the conflict, including Prince William and Kate Middleton. In fact, Prince William recently said that his kids have been asking about the war in Ukraine, and there are no easy answers.

Wearing blue and yellow pins, the Duke and Duchess of Cambridge visited the Ukrainian Cultural Centre in London last week to discuss how to help Ukrainians in the U.K. and the rest of Europe during the Russian invasion of their country. (They even brought brownies and granola bars from their own Kensington Palace kitchens for the volunteers.) As he spoke to the Ukrainian community members, Prince William shared that his own children were struggling to understand the current events, as reported by People.

"Ours have been coming home asking all about it," Prince William said at the event, according to the Daily Mail’s royal correspondent Rebecca English. "They are obviously talking about it with their friends at school.” He also said he had to “choose my words carefully to explain what is going on” to his kids with Middleton: 8-year-old Prince George, 6-year-old Princess Charlotte, and 3-year-old Prince Louis.

Relatable words, coming from a prince. It seems some aspects of parenthood are inescapable, and translating horrific events into age-appropriate information is one of them.

Since Russia launched its full-scale invasion, Prince William and Middleton have spoken out in support of Ukraine. On Feb. 26, the Duke and Duchess and Cambridge shared the following statement on their Instagram account: “In October 2020 we had the privilege to meet President Zelenskyy and the First Lady to learn of their hope and optimism for Ukraine's future. Today we stand with the President and all of Ukraine's people as they bravely fight for that future.”

Most recently at the Commonwealth Day service at Westminster Abbey on Monday, Middleton wore a symbolic piece of jewelry. As Page Six reported, Middleton wore the same the earrings and necklace that she wore in 2020 when she met with President Zelensky and First Lady Olena Zelenska.

As difficult as it might be to explain the concept of war to a small child, nothing compares to the anguish of a parent who has to protect their child from the daily reality of war.

More Like This
Kate Middleton Explains Why Her Kids Couldn't Attend The Top Gun: Maverick Premiere
Jimmy Kimmel Had Harsh Words For Politicians After Texas Elementary School Massacre
Amanda Gorman Spoke The Truth In Powerful, Viral Poem After Texas School Shooting
Meghan & Harry Celebrated Their Anniversary As A Family Of Four For The First Time