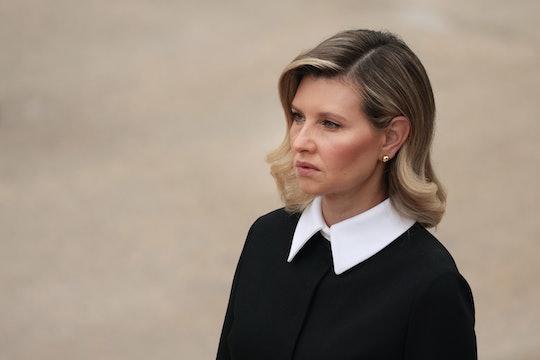 “The first newborn of the war, saw the concrete ceiling of the basement, their first breath was the acrid air of the underground.”

In the two weeks since Vladimir Putin ordered Russian troops to invade neighboring Ukraine, nearly 2 million people have fled the country. Hundreds of civilians, including children, have been killed. Ukrainian President Volodymyr Zelensky has emerged as a strong political presence in his country, refusing to leave the capital city of Kyiv despite imminent danger of being targeted. His courage has been lauded by leaders around the world, but on Tuesday it was his wife, Olena Zelenska, who took center stage. The first lady penned an open letter pleading for help from other countries while painting a bleak picture of what life is like under Russian siege.

“What happened just over a week ago was impossible to believe,” Zelenska’s open letter to international media began. “Our country was peaceful; our cities, towns and villages were full of life. On February 24th, we all woke up to the announcement of a Russian invasion. Tanks crossed the Ukrainian border, planes entered our airspace, missile launchers surrounded our cities. Despite assurances from Kremlin-backed propaganda outlets, who call this a ‘special operation’ — it is, in fact, the mass murder of Ukrainian civilians.”

Zelenska went on to remind readers just how close the war is to their own doorsteps. “The war in Ukraine is not a war ‘somewhere out there.’ This is a war in Europe, close to the E.U. borders,” she continued. “Ukraine is stopping the force that may aggressively enter your cities tomorrow under the pretext of saving civilians.”

Zelenska, who reportedly remains in Ukraine at an undisclosed location with the couple’s two children, wrote that “this war is being waged against the civilian population.”

“Our women and children now live in bomb shelters and basements,” she wrote. “You have most likely all seen these images from Kyiv and Kharkiv metro stations, where people lie on the floors with their children and pets — trapped beneath.”

The first lady went on to paint a heartbreaking image of how Ukrainian children are especially suffering and dying as a result of the war. “Perhaps the most terrifying and devastating of this invasion are the child casualties,” she wrote. “Eight-year-old Alice who died on the streets of Okhtyrka while her grandfather tried to protect her. Or Polina from Kyiv, who died in the shelling with her parents. 14-year-old Arseniy was hit in the head by wreckage, and could not be saved because an ambulance could not get to him on time because of intense fires. When Russia says that it is 'not waging war against civilians,' I call out the names of these murdered children first.”

“The first newborn of the war,” she continued, “saw the concrete ceiling of the basement, their first breath was the acrid air of the underground, and they were greeted by a community trapped and terrorized. At this point, there are several dozen children who have never known peace in their lives.”

While Zelenska acknowledged and thanked volunteers and bordering countries like Poland and Romania who have welcomed Ukrainian refugees, she has asked NATO countries to “close the sky, and we will manage the war on the ground ourselves.” Zelenska refers to a no-fly zone that would prohibit certain types of flights over Ukraine, effectively halting the bombing being carried out by Russian aircrafts. NATO has so far been hesitant to declare a no-fly zone out of concern that it could cause a dramatic escalation.

Zelenska ended the letter with the words, “We will win. Because of our unity. Unity towards love for Ukraine. Glory to Ukraine!”