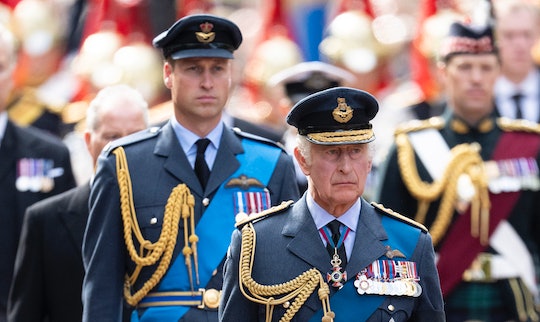 The Prince of Wales reveals that the cortege brought up difficult memories.

When a bereaved Prince William was only 15 years old, the entire world watched as he walked behind his beloved mother’s coffin for her funeral procession. It was a devastating scene that the newly titled Duke of Cornwall will of course never forget throughout the course of his adult life. And now that he has lost his beloved grandmother too, Prince William revealed that Queen Elizabeth’s cortege stirred up difficult memories. The grieving royal shared that the somber scene reminded him of his mother’s funeral in 1997.

Richard Palmer, a royal correspondent for the Daily Express, took to Twitter to share the emotional encounter. “Prince William told a woman sympathising with him at Sandringham that the procession yesterday had been ‘very difficult’ and had reminded him of walking behind his mother’s coffin. He told another woman: ‘Don’t cry now, you’ll start me,’” Palmer tweeted.

Several Twitter followers chimed in to express their condolences and heartbreak for the Prince of Wales. Some also noticed other parallels between the losses of Diana and Queen Elizabeth. “When I saw William & Kate today looking at the mounds of flowers left for the Queen, it brought back memories of William, Harry & Charles looking at all the flowers left for Diana after her death,” replied one.

Prince William has been very open about the suffering he endured from the loss of his mother at a young age. An advocate of mental health, he’s also vowed to honor his mother’s legacy by teaching his own kids to be caring and philanthropic citizens who give back.

In a TikTok clip that went viral, the royal was surprisingly candid about how he would not let the death of his mother break him. “I wanted her to be proud of the person I'd become. I didn't want her worried or her legacy to be, you know, that William and/or Harry were completely and utterly devastated by it,” he said in the video shared by @royalfamilysupporters.

After enduring so much loss in his life and losing two of the women who meant the most to him, the Duke of Cornwall has emerged as a strong and caring leader who isn’t afraid to be vulnerable and express his feelings.