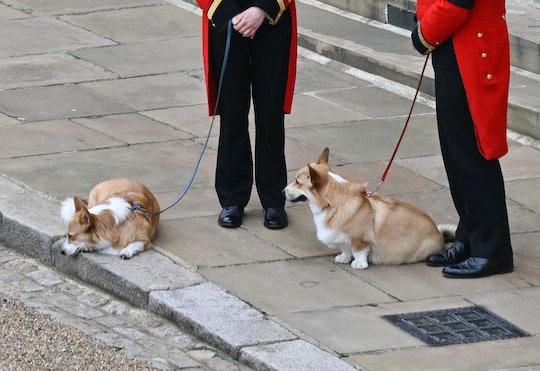 Queen Elizabeth's Corgis Will Be "Spoiled Rotten," According To Prince William

“They’ll be looked after very well. Spoiled rotten, I’m sure.”

It was perhaps one of the most heart-wrenching moments of Queen Elizabeth’s funeral on Monday; the sight of her two corgis, Sandy and Muick, sitting outside of Windsor Castle. Waiting patiently to greet the woman who loved them so much. Naturally the sight of these sweet corgis had dog lovers the world over worried about how they might carry on now that their beloved mistress has died. But, according to Prince William, there’s nothing to worry about. He told royal watchers that the corgis will be “spoiled rotten.”

Prince William spoke to well-wishers who had lined up outside Westminster Hall for hours to pay their respects to the Queen as she was lying-in-state, and the subject of her dogs came up. “I saw them the other day, that got me quite sad,” the Prince of Wales explained at the time, according to Town and Country, although he was quick to reassure corgi fans that “they are going to be looked after fine. They’ll be looked after very well. Spoiled rotten, I’m sure.”

Considering their preferred lifestyle of running the show at Buckingham Palace, it seems only fitting that they would be spoiled rotten.

Queen Elizabeth’s two corgis are going to live with the Duke and Duchess of York at Royal Lodge on the family’s Windsor Estate. This actually makes sense, as Sandy and Muick were originally a gift from the couple’s daughters, Princesses Eugenie and Beatrice. She also shared a love of dogs with Sarah Ferguson, the Duchess of York, and the two would walk the dogs on the grounds of Windsor Estate on a regular basis, according to CNN.

Corgis have been a part of Queen Elizabeth’s life since she was a little girl living alongside her sister Princess Margaret at Royal Lodge. She owned more than 30 corgis in her lifetime and her final two corgis were apparently a “godsend” during lockdown when Her Majesty was forced to spend so much time alone, according to her longtime dresser Angela Kelly. “I was worried they would get under The Queen's feet, but they have turned out to be a godsend. They are beautiful and great fun and The Queen often takes long walks with them in Home Park,” Kelly wrote of the dogs’ last months with their Queen, per Town and Country.

As long as the corgis continue to be spoiled rotten for their many years of service to Queen Elizabeth, all will be well here.