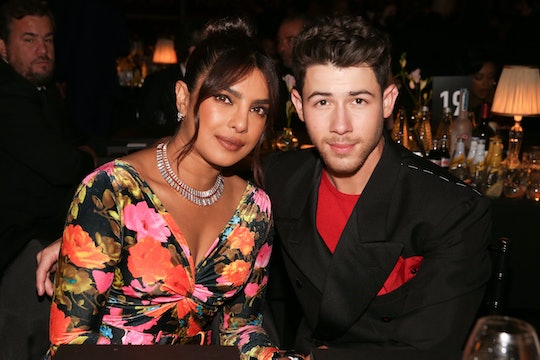 The Jonas family just keeps getting bigger and bigger. On Friday, Nick Jonas and Priyanka Chopra announced that they had welcomed their first baby together in a sweet post on Instagram.

“We are overjoyed to confirm that we have welcomed a baby via surrogate,” Chopra wrote on Instagram. “We respectfully ask for privacy during this special time as we focus on our family. Thank you so much.”

The couple did not share the name of their little one or the sex of their baby. They also did not share the news that they were expecting a baby, although just one week before their special arrival Chopra did tell admit that she and her husband wanted children. “They’re a big part of our desire for the future,” the Quantico actress told Vanity Fair cover story published Thursday. “By God’s grace, when it happens, it happens.”

Little did we know then that it would happen within a week or so. Talk about playing your cards close to the chest.

Chopra alluded to the couple’s interest in becoming parents years ago as well, telling Tatler in 2020, “It is something that I definitely want to do and I’m hoping that whenever God wills it, at the right, opportune time, it’ll happen.”

The time is now, and it sounds as though it’s perfect timing for the couple. Jonas himself admitted to Extra in 2021 that he and Chopra, who got married in 2018, would be “blessed with any child, son or daughter or anything. Just knocking on wood that it happens.”

Perhaps being an uncle to Kevin Jonas’ two daughters with wife Danielle, 8-year-old Alena and 5-year-old Valentina, as well as 1-year-old niece Willa from brother Joe and his wife Sophie Turner, had Nick wanting to get the whole process started. He opened up to Entertainment Tonight in Nov. 2020 about meeting his newest little niece, saying “I have [met her],” he told the news outlet. “It's, you know, Joe and Sophie's thing to speak about or not, but she's the best.”

Now he and Chopra have started their own little family within the family. And this baby will have plenty of aunts and uncles of their own, waiting in the wings to spoil them.

More Like This
Patrick Mahomes & Brittany Matthews Reveal They're Expecting A Baby Boy In Sweet Video
Nick Jonas Shared A Rare Photo With His Daughter Malti In The Cutest Matching Shoes
Tom Hiddleston & Zawe Ashton Are Expecting Their First Child Together
Catherine Reitman Calls It Like She Sees It: “Being A Working Mother Is Impossible”