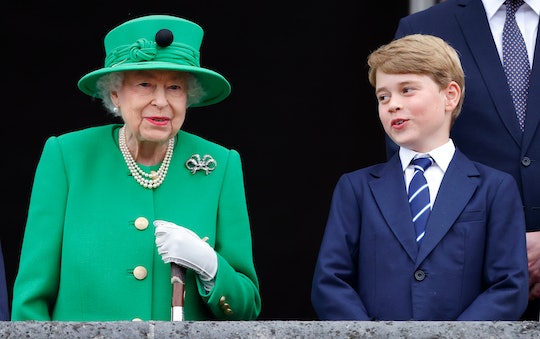 TBH, it’s one we can all get behind.

Naturally as someone who hosts formal dinners with state officials and visiting dignitaries, Queen Elizabeth has a lot of etiquette rules for such occasions. No one can eat before she eats, and they have to stop eating when her “cutlery goes into the finished position, everyone else should follow suit — regardless of whether there is food left on their own plates,” etiquette expert William Hanson told Marie Claire. Too bad if you’re still hungry; you’re done when she says she’s done. You also have to drink from the same spot on your cup, especially if you’re wearing lipstick.

Those are the rules for dinner guests, of course. When it comes to dining with members of her own family, Queen Elizabeth keeps it slightly less formal. But she still rules with an iron fist. Especially if one of the royal grandchildren try to pull out a cell phone during dinner. That’s a big no in the royal family.

Television presenter Gyles Brandreth shared a bit of intel about visiting Her Majesty for dinner with ITV's This Morning, explaining that she is his “role model in all things,” per The Mirror. “One of the things she won’t allow at the table with her grandchildren and indeed her great-grandchildren is mobile phones at mealtimes.”

Brandreth went on to add that, while it might not be as done up as a state dinner, Queen Elizabeth’s also not eating in front of the television either. “She likes a formal, and I too like a fairly formal meal. It doesn’t mean to say you have to have a napkin. But you do have to sit at the table nicely and you certainly mustn’t eat with your mouth open!”

This probably isn’t a big deal just yet for 9-year-old Prince George, 7-year-old Princess Charlotte, or 4-year-old Prince Louis, but let’s face it. Eventually they’re going to have cell phones. And their great-grandmother is going to tell them to put them away at the table. Not the weirdest rule from Her Majesty by a long shot. That honor goes to her ban on the board game Monopoly.

More Like This
Queen Elizabeth II's Most Romantic Quotes About Prince Philip
Queen Elizabeth's Corgis Will Be "Spoiled Rotten," According To Prince William
Prince Louis Is Asking His Parents Questions As He Tries To Understand Queen Elizabeth’s Death
Kate Middleton Honored Queen Elizabeth & Princess Diana At Her Majesty's Funeral