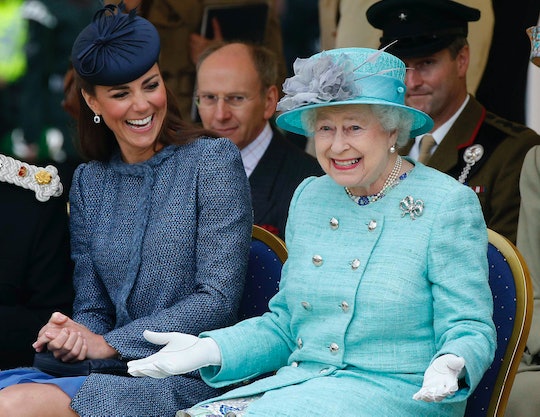 And they’re not the only ones in the royal family who enjoy it!

Queen Elizabeth never stops surprising her royal fans. Just when you think you’ve learned everything there is to know about her, a new little detail will pop up and totally shift your idea of who you think she might be. For instance, the longest reigning monarch has a favorite reality TV series. What’s more, she’s not even the only member of the royal family who watches it.

Camilla, Duchess of Cornwall recently spilled the beans during a visit with Prince Charles to the set of the popular BBC television series Eastenders, which is the longest running television series on the network. While there, the couple met actress Rose Ayling-Ellis, who was a 2021 competitor in the BBC reality series Strictly Come Dancing, which is quite similar to Dancing With The Stars in the United States. Strictly Come Dancing features celebrities dancing with professionals and then the audience gets to vote on their favorites... and it seems the royal family were watching and voting themselves.

“I said we were all voting for Rose, I don't know how you did all those dances,” Camilla told Ayling-Ellis, per The Daily Mail, who ended up winning last year.

When Ayling-Ellis asked if Queen Elizabeth also watched the series, Camilla responded, “I think she does. She probably watched you.”

If Queen Elizabeth is interested in doing a post-show breakdown of which dance she liked and who she might be voting for, she can always turn to Kate Middleton. In 2019, Prince William opened up to Strictly Come Dancing judge Shirley Ballas and host Claudia Winkelman at a charity gala about how much his wife loved the show. “I have watched the show a couple of times,” he said, according to The Daily Express. “Catherine is a huge fan and my mother-in-law loves it.”

Now, it’s not terribly surprising to learn that Queen Elizabeth watches television. She did admit to U.S. Special Presidential Envoy for Climate Change John Kerry last October, “I saw you on the telly the other night doing William’s Earthshot Prize thing,” after all. But in that instance she was a proud grandmother diligently watching her grandson. Now we know that Queen Elizabeth is not above kicking back at the palace and enjoying a little reality TV.

More Like This
Prince Harry & Meghan Markle Could Take Us Inside Their Home For A New Docuseries
Kate Middleton Keeps Getting “Broody” Around Adorable Babies
Kate Middleton Explains Why Her Kids Couldn't Attend The Top Gun: Maverick Premiere
Meghan & Harry Celebrated Their Anniversary As A Family Of Four For The First Time