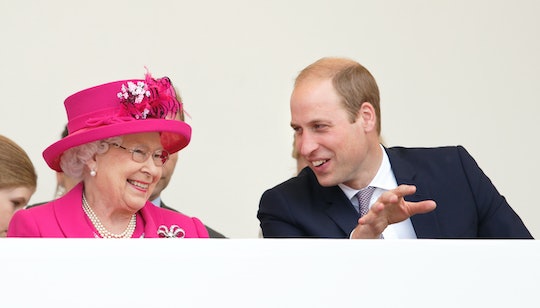 “I saw you on the telly the other night doing William’s Earthshot Prize thing.”

Prince William’s recent television appearance had at least one member of his family tuning in. His perpetually proud grandmother Queen Elizabeth watched her grandson “on the telly,” and it was a sweet reminder that he isn’t simply her heir to the throne — he’s a beloved grandson out in the world doing good work.

Queen Elizabeth joined Prince William and Prince Charles on Tuesday in welcoming business and investment leaders from around the world at St. George’s Hall for a Global Investment summit. The event came after Prince William’s documentary Earthshot: Repairing Our Planet was released for streaming on the BBC and Discovery+, something that was brought up by the queen herself when she was chatting with U.S. Special Presidential Envoy for Climate Change John Kerry.

While Kerry might be a well-known figure on the global scale, to Her Highness he was especially recognizable for one reason only. “I saw you on the telly the other night doing William’s Earthshot Prize thing,” Queen Elizabeth told Kerry in a video clip shared by Sky News, and now everyone can imagine her curled up in front of the telly grinning proudly at her grandson like he is a superstar.

Prince William’s grandmother is a fan of his.

There is another reason why Queen Elizabeth might be especially proud of Prince William’s work to end climate change. He is following in the footsteps of her late husband Prince Philip. The Duke of Edinburgh was a passionate environmentalist long before climate change became part of every day conversation, and he passed on that legacy to his son Prince Charles. Who passed it on to his own son Prince William. Royal author Duncan Lancombe told The International News, “The Queen will be very proud, especially as he’s following in the footsteps of Prince Philip, who was the original environmentalist at a time when he was almost alone in his thinking. Prince Charles has continued that legacy for the past 20 years, building on his father’s commitment to raising environmental awareness and now Prince William is doing so as well.”

Queen Elizabeth watching her grandson’s documentary on television is basically the royal version of your grandmother coming to your school talent show. She’s just so proud, and for good reason.

More Like This
You’ve Probably Been Pronouncing “Lilibet” All Wrong
10 Ways Prince George & Prince Louis Are So Different From Each Other
Meghan Markle Calls On Men "To Be Vocal" In The Aftermath Of Roe v. Wade Ending
Princess Charlotte Got So Excited To Shake A Royal Fan's Hand