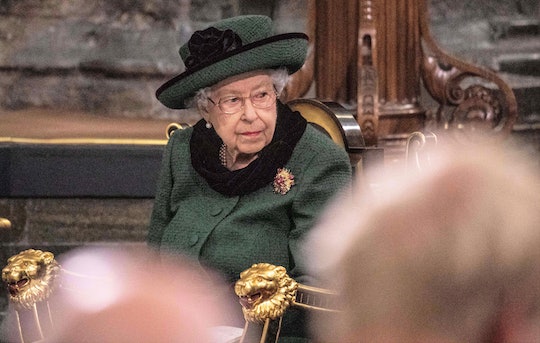 And so did other members of the royal family.

When Queen Elizabeth laid Prince Philip to rest in April 2021, the funeral was a somber moment. Not simply because she was saying goodbye to a husband who was her “strength and stay” for seven decades, but because she was so alone. Covid safety precautions were such at the time that Queen Elizabeth was not really able to mourn with her family or even sit next to them. So when she was able to attend Tuesday’s memorial service for Prince Philip, she seemed to really think about how she wanted to say this final goodbye. With her family beside her, with her presence at Westminster Abbey, and as ever, with her outfit choice. She honored her husband’s memory by wearing a color that was very specific to the Duke of Edinburgh. And what’s more, so did other members of her family.

Queen Elizabeth wore a coat in a color called Edinburgh green, the exact shade of green worn by members of Prince Philip’s official livery, as People explains. The color was worn by his staff members, and was even the same color as the very Land Rover that carried his coffin at his funeral in April.

Queen Elizabeth wasn’t the only member of the royal family to wear Edinburgh green to Prince Philip’s memorial service at Westminster Abbey on Tuesday. Her daughter Princess Anne and Camilla, Duchess of Cornwall also wore dresses in the same shade.

Queen Elizabeth was joined at Prince Philip’s memorial service by members of the royal family, including the Duke and Duchess of Cambridge and their two oldest children, 8-year-old Prince George and 6-year-old Princess Charlotte, along with approximately 1,800 other mourners. While Queen Elizabeth sat alone at her husband’s funeral, this time she had family around her to support her. She arrived from Windsor Castle on the arm of her son Prince Andrew, and sat next to her oldest son Prince Charles.

The event was not without tears for the royal family. New mom Princess Beatrice got emotional saying a final goodbye to her grandfather, while Queen Elizabeth herself looked quite reflective and sad at points during the 45-minute ceremony. Which is, of course, as it should be. How beautiful it was to see Queen Elizabeth, dressed in a color to honor her husband, finally be able to say goodbye alongside her family.