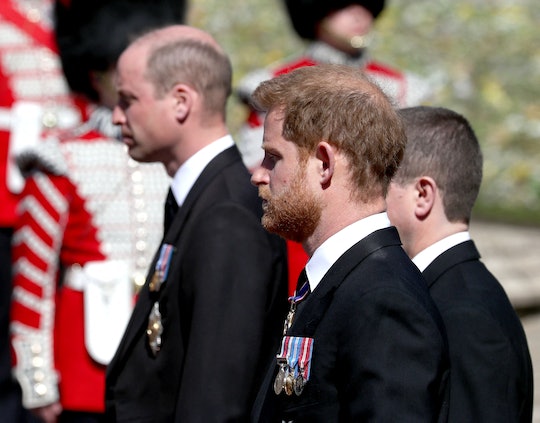 Prince Harry, Prince William, and Kate Middleton joined together to pay their respects.

His family, however, needed to make a bit of a fuss for their “dear Papa,” as Prince Charles called him in a lovely tribute. A small funeral of 30 close family members was held after the entire family shared tributes to the man they loved. Prince Harry flew home from California to say goodbye to his grandfather after writing a sweet, thoughtful message about his “cheeky” grandpa. New mom Princess Eugenie honored her grandfather by remembering his favorite beer. Everyone shared memories and tributes and photos of their lives spent in the company of the Duke of Edinburgh before his death on April 9 at his home. And on Saturday, they gathered as close as they could to say goodbye, say thank you, and be there for their grandmother Queen Elizabeth.

Perhaps one of the saddest images to come from Prince Philip’s funeral was of Queen Elizabeth, longest reigning monarch to ever wear the crown in the United Kingdom, sitting alone in a church as she laid her husband to rest. Due to COVID-19 restrictions, she arrived alone, waited inside the church alone, and honored her husband alone. Bowed her head in prayer, alone.

Sorrow In The Time Of COVID-19

Prince Philip’s funeral was certainly affected in many ways by COVID-19. The Queen saying goodbye alone, of course, but also the use of face masks and social distancing. Not to mention the nearly empty church where only 30 family members could gather.

Queen Elizabeth bowing her head at her husband’s funeral.

Tributes To A Life Well Spent

Queen Elizabeth might have sat alone, she found subtle ways to honor her husband. The funeral wreath was chosen by the Queen herself and included white lilies, small white roses, white freesia, white wax flower, white sweet peas and jasmine, according to Hello! Magazine, all of which carried special significance. The white rose is the flower of June, the month of Prince Philip’s birth, while lilies tend to be wedding flowers.

Another personal tribute was the inclusion of Prince Philip’s riding gloves, cap, and a little pot of sugar cubes to feed the horses on his carriage. The Duke of Edinburgh was a noted horse lover who often took his grandchildren and great-grandchildren for rides, like he did with 7-year-old Prince George in a photo shared by the Duke and Duchess of Cambridge.

Prince Philip’s self-designed Land Rover Defender, a vehicle he had been tweaking for years, acted as a hearse. It was a significant nod to his life as a military man, painted dark green, and the Grenadier Guards placed his coffin in the open-top vehicle to take him to his own funeral.

Members of the royal family walked behind Prince Philip’s coffin in the funeral procession, with Prince Charles and Princess Anne leading the way and their younger siblings, Prince Andrew and Prince Edward, walking behind them.

Prince Charles and Princess Anne both looked particularly upset at the loss of their father as they entered the church, and anyone who has lost a family member understands this sort of pain.

Prince Edward’s wife Sophie, the Countess of Wessex, was not part of the funeral procession but stood with her head bowed as Prince Philip’s coffin passed, comforting her children James, Viscount of Severn and Lady Louise as they mourned their grandfather.

Kate Middleton also paid tribute to Prince Philip and even wore a necklace with a special nod to his long-lasting marriage to the Queen. A necklace she wore to their 70th wedding anniversary in 2017 that was on loan from Queen Elizabeth, as InStyle reported. As a future royal consort herself, this was a lovely little tribute.

Lady Louise and her brother James were the youngest members of the family at the funeral. As the Duke of Edinburgh’s youngest grandchildren, they did a wonderful job paying their respects.

Princess Eugenie, daughter of the Duke of York, was on hand to say goodbye to the grandfather she loved so much she named her son, August Philip Hawke Brooksbank, after him.

Zara Tindall, daughter of Princess Anne, also recently welcomed a baby boy and also named him after her grandfather, Lucas Philip Tindall. How wonderful that he knew of these lifelong tributes before he died.

Prince Harry’s return to the United Kingdom was a much debated, much talked about moment ahead of the funeral. Articles written about possible contention between him and his brother Prince William, about Queen Elizabeth’s changing relationship with him and his wife Meghan Markle after their interview with Oprah Winfrey in March. But in the end, he was simply a grandson saying goodbye to a grandfather he loved.

The Duke of Sussex walked behind his grandfather’s coffin alongside his cousin Peter Phillips, son of Princess Anne, with his brother Prince William in line with him.

While the Duchess of Sussex couldn’t join her husband as she is pregnant and her doctor advised against it, she did send flowers to the funeral along with a handwritten note, TODAY reported. The wreath she chose included Acanthus mollis, the national flower of Greece, and sea holly to represent the Royal Marines.

Prince Harry is flanked by Kate Middleton and Prince William.

Despite the year apart, despite the interviews and rumors of animosity, when it came time to paying their final respects to their grandfather, Prince William and Prince Harry were simply brothers. Back together again. Talking with Kate Middleton as casually as anything.

Of course, the two men were presumably there to comfort their own father.

At the end of the day, the royal family is a family like anyone else. They gather to mourn when they lose one of their own. And hopefully put aside their differences to say goodbye to a man who finally, whether he wanted it or not, deserved to be the one in the spotlight.