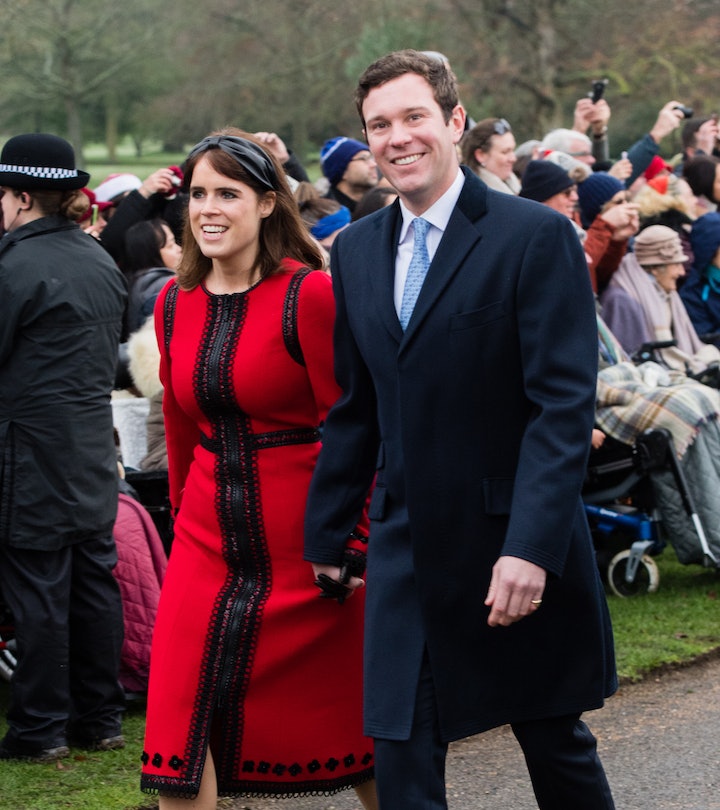 The littlest member of the royal family officially has a name. Days after the queen's granddaughter Princess Eugenie announced the birth of her son and first child with her husband Jack Brooksbank, the new mom shared the first photo of his face and revealed his name later that week.

“We wanted to introduce you to August Philip Hawke Brooksbank,” Princess Eugenie captioned the series of photos of her son, taken by her “wonderful midwife” and posted to Instagram on Feb. 20.

The youngest daughter of Prince Andrew and Sarah Ferguson, the Duchess of York, welcomed her first child on Feb. 9 at Portland Hospital, according to a press release shared with People from Buckingham Palace.

"Her Royal Highness Princess Eugenie was safely delivered of a son today, 9th February 2021, at 8: 55 a.m. at The Portland Hospital," the announcement read. This is the same hospital in Westminster where Meghan Markle and Prince Harry privately welcomed their own baby, son Archie, in May 2019. What's more, Princess Eugenie herself was born at Portland Hospital in 1990, so there's a lot of special significance there.

The statement from the palace went on to note that Brooksbank was present for the birth and that "The Queen, The Duke of Edinburgh, The Duke of York, Sarah, Duchess of York, and Mr. and Mrs. George Brooksbank have been informed and are delighted with the news." The statement added, "Her Royal Highness and her child are both doing well."

The meaning behind their son’s name, August Philip Hawke Brooksbank, is rooted in family history. His first name, August, is from Queen Victoria’s husband, Prince Albert, who was born as Franz August Karl Albert Emanuel, according to the Royal Family. Philip comes from Princess Eugenie’s 99-year-old grandfather, Prince Philip. And the name, Hawke, is a Brooksbank family name, according to the BBC. “He is named after his great grandfather and both of his great x5 grandfathers,” Princess Eugenie wrote in a now deleted post to her Instagram Story over the weekend.

This little boy is the ninth great-grandchild for Queen Elizabeth and the first grandchild for the Duke and Duchess of York. Princess Eugenie, who married Brooksbank in 2018, shared a photo to capture the moment on her own Instagram page.

Princess Eugenie first announced she was expecting in September, with a photo of a pair of bunny slippers and the message that she and her husband were "so excited for early 2021." They aren't the only family members to be excited about this little boy. Back in September Sarah Ferguson told Hello!, "Soon to be Grandpa and Granny are absolutely overjoyed."

In the Instagram post on Saturday announcing their son’s name, the couple thanked everyone for their well wishes regarding their son’s birth. “Thank you for so many wonderful messages,” she wrote. “Our hearts are full of love for this little human, words can’t express.”

In the weeks before her grandson was born, Sarah Ferguson gushed over her daughter's future role as mom to Us Weekly, "I’ve always been determined to be a very present mother with my children, and I know Eugenie will be the same with hers. She is incredibly empathetic and will be a great mother. She is a very strong and determined person, always looking for the truth in all she does."

Now that the ninth royal great-grandchild has arrived, he will have lots of cousins around as playmates as he grows up.

This article was originally published on Feb. 9, 2021