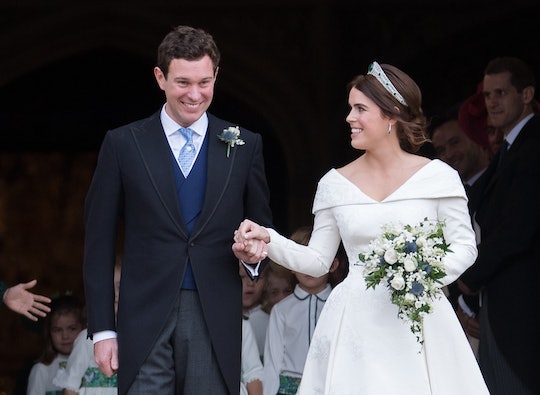 Royal Baby Alert: Princess Eugenie Is Pregnant & "So Excited" To Become A Mom

Hear ye, hear ye! Another royal baby will making a grand royal debut in just a matter of months. On Friday, Princess Eugenie announced she's pregnant and expecting her first child with her husband Jack Brooksbank, and their sweet reveal on Instagram was fit for a little king or queen.

Princess Eugenie and Brooksbank tied the knot in October 2018 after dating for several years. And nearly two years later, the youngest daughter of Prince Andrew and Sarah Ferguson announced she and her husband are expecting their first child together.

"Jack and I are so excited for early 2021....," Princess Eugenie wrote on Instagram alongside two photos: one of herself holding a little pair of baby slippers, with her gorgeous ring prominently displayed, and another of the couple smiling happily.

While Princess Eugenie didn't share a photo of her growing bump or her actual due date, the vague time period of "early 2021" could mean that she is due in January, February, or March of next year, so the royal family's newest addition will be here in no time.

Princess Eugenie's first child will be the first grandchild for the Duke and Duchess of York, and the ninth great-grandchild for Queen Elizabeth.

Other members of the royal family were quick to share their own excitement about the news, with the royal family's official Instagram page sharing a wedding photo of Princess Eugenie and Brooksbank and the message, "Her Royal Highness Princess Eugenie and Mr Jack Brooksbank are very pleased to announce that they are expecting a baby in early 2021. The Duke of York and Sarah, Duchess of York, Mr and Mrs George Brooksbank, The Queen and The Duke of Edinburgh are delighted with the news."

Princess Eugenie's mom Sarah Ferguson also shared the news on her own Instagram page, saying she is "thrilled for them both and in my 60th year cannot wait to be a grandmother. Welcoming a new baby into the York family is going to be a moment of profound joy."

This has been a pretty exciting year for Ferguson as a mother. Not only will she become a grandmother for the first time but her oldest daughter Princess Beatrice married Edoardo Mapelli Mozzi in an intimate ceremony at All Saint's Chapel, in Windsor Great Park in July.

Princess Eugenie's baby is going to be a lucky little person with so many royal cousins to play with, including Prince William and Kate Middleton's three children as well as 17-month-old Archie, who will hopefully visit with his parents Meghan Markle and Prince Harry when next they travel to the U.K. Imagine that photo shoot, why don't you.