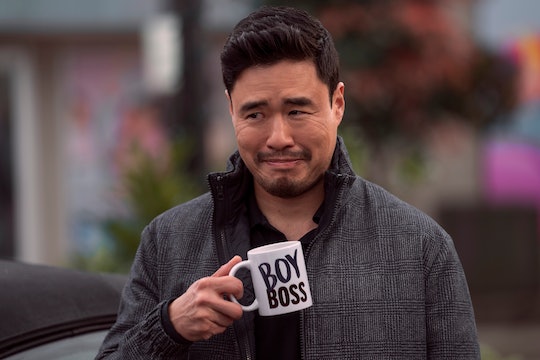 The actor and dad serves on the board of KultureCity, working to make the world more inclusive of people with invisible disabilities.

In the new Netflix series Blockbuster, Randall Park plays Timmy Yoon, the owner of the last brick-and-mortar video chain location in America trying to keep the business alive. Timmy is another in a series of characters depicted by Park that bucks the model minority myth — a harmful misconception that all Asian Americans are well-educated, wealthy professionals. Before his recurring role as the lovable and down-to-earth agent Jimmy Woo in the Marvel Cinematic Universe earned him a following, Park became well-known for playing the amiable, middle-class restaurant-owner father in the ABC sitcom Fresh Off the Boat, and later the charming, blue-collar nice guy rom-com lead opposite Ali Wong in Always Be My Maybe (which he also co-wrote and co-produced). Prior to these groundbreaking works, Asian actors on-screen who didn’t have to fake an accent for a role were a rare sight, let alone realistic representations that weren’t bit-part caricatures like the nerdy Asian doctor or scientist.

“I've always felt more personally connected to working-class stories,” says Park. “Maybe because that was my life for so long. Even while I was pursuing acting, I was working so many different jobs.” (Fun fact: In high school in Los Angeles, one of his side jobs was working at a neighborhood mom-and-pop video store called New Wave Video.)

On weekends, Park would go in to help out and bring food for his dad. “This was at a time when the digital age was dawning, and digital cameras were becoming the thing,” he explains. “And this one-hour photo store was getting phased out.” The actor observed firsthand how difficult it was for his father to keep this business going as he lost more and more customers to modern technology.

Literally, every race is represented in the group of friends that I grew up with and I’m still friends with to this day so it feels very comfortable to me to be able to be a part of a show that depicts these relationships.

Blockbuster, created by Vanessa Ramos, who also wrote for Brooklyn Nine-Nine and Superstore, features diverse writers and cast members. Park observes that being a lead of a show like this would not have been possible in the past. “[The series] isn't about necessarily the Asian American experience… there's no commentary on the immigrant struggle,” he adds. “It's really just a workplace comedy.”

The series also provided the opportunity for Park to reunite with some beloved past co-stars, including J.B. Smoove, who plays Timmy’s best friend and landlord — and their bromance is strong. “We played old college roommates and friends [on Fresh Off the Boat] and got along so well and had so much fun,” says Park. “When I found out that they were going to make an offer to J. B., I immediately texted him and I was like, ‘J. B., please, you got to do this. I just want to hang out with you.’”

I asked Park about the importance of representing friendships between Black and Asian characters. “For me, it's not unusual,” he replied. “I mean my best friends that I grew up with were so diverse and it wasn't a weird thing. Literally, every race is represented in the group of friends that I grew up with and I'm still friends with to this day so it feels very comfortable to me to be able to be a part of a show that depicts these relationships.”

In another delightful Easter egg for fans, Blockbuster banks some more on proven chemistry by casting James Saito — who played Marcus Kim’s laid-back dad in Always Be My Maybe — to portray Timmy’s father in an episode that deals with the theme of holding personal boundaries, even when it comes to those we love the most.

And speaking of lovable Asian American dads, in playing Louis Huang on Fresh Off the Boat, Park portrayed the ideal sitcom dad that so many Asian Americans like myself wished we had both on screen and in real life. Park, who welcomed a daughter not long before the show began, says, “Playing Louis really did shape my worldview when it came to parenting because Louis is just so positive and loving and just really all about his family.”

Being all about family for Park includes serving on the board for a nonprofit called KultureCity with his wife, Jae Suh Park (Never Have I Ever), a fellow actor whom he worked with on The Mindy Project. “Our daughter, Ruby, is on the autism spectrum,” says Park. “KultureCity is an organization all about making the world more inclusive for people with invisible disabilities.”

According to the CDC, 1 in 4 adults, or 61 million Americans, live with a disability – of those, an estimated 10% live with an invisible disability, which includes autism, diabetes, epilepsy, mental health conditions, and others. “The world is not very inclusive of people [with invisible disabilities],” says Park. “So what KultureCity does is educate, train, and provide safe spaces in public settings — sensory rooms and rooms where if people are overwhelmed, they could just go and relax — so that people with these disabilities can feel more a part of the world around them.”

What makes all of Park’s roles so appealing, and what he injects into all of his characters is that same heart and caring he brings to the board of KultureCity in advocating for his daughter and others with invisible disabilities. Timmy in Blockbuster is no exception. “I wasn't sure if I wanted to do another sitcom, but then I read the script and I just really loved it so much,” says Park. “It had so much heart. It felt so current and like a big, warm hug.”