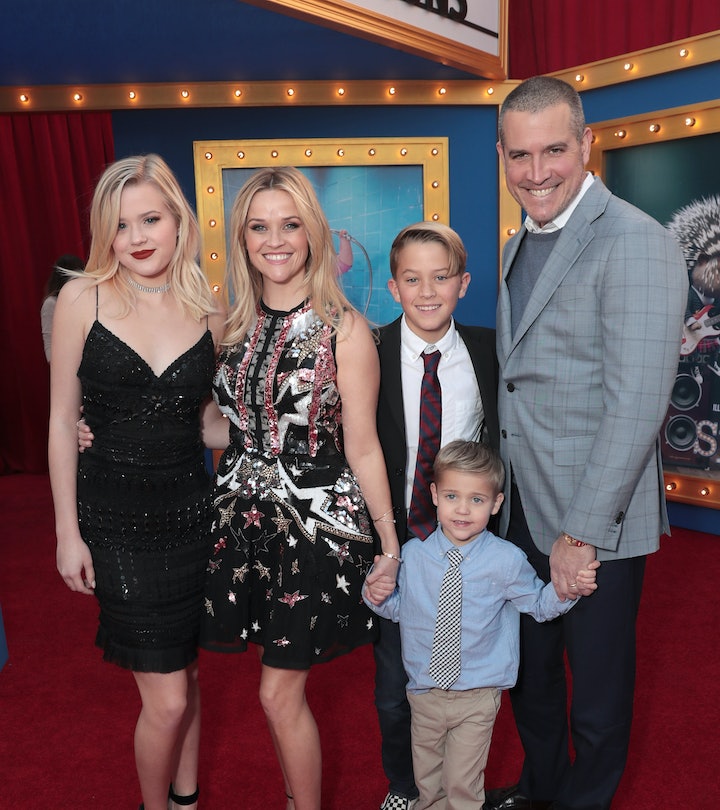 Most recently, the actress’ daughter Ava made it clear that she would not stand for “hateful messages” after she opened up about her sexuality.

Reese Witherspoon played a very believable mom on HBO’s Big Little Lies. The hit HBO series saw the actress trying to divide her time between her teen daughter from her first marriage and her young daughter from her second marriage, something Witherspoon knows a little bit about in real life. Because, just like Madeline Mackenzie in Big Little Lies, Witherspoon’s three children span a decade or so. And she seems to be loving every minute of it.

She Was A Young Mom In Hollywood

Witherspoon became a mom when she was just 23 years old and newly married to first husband and Cruel Intentions co-star Ryan Phillipe. (The couple divorced in 2006). At the time, she struggled with postpartum depression after the birth of her first child, daughter Ava Phillipe, and “didn't have the right kind of guidance or help,” as she told Jameela Jamil in 2020. “But I managed to just white-knuckle back,” she said at the time. Since then, Witherspoon went on to welcome two sons, Deacon with Phillipe and Tennessee with her husband Jim Toth.

Like so many moms, the Legally Blonde actress found herself somewhat blindsided by how much parenting would change her. “I didn't know what it was going to do to my job or my career," Witherspoon admitted on Instagram in 2020. "Your entire life will change. Everything you believe, every piece of food you eat. Every piece of independence you have. You can't go out without thinking of another person. You don't think about whether you're cold or hot, you think about whether your kid is cold or hot."

It also came as a surprise to her that her kids would become their own people, “Parenthood is not at all what I expected it to be,” she once said. “I thought you make little people in your image. But they are just nothing like me or their father. They are their own individuals.”

That is what her kids are certainly becoming. Their own individuals.

Her Daughter Ava Phillipe Is 22

Ava Phillipe is her own person.

Witherspoon’s 22-year-old daughter Ava may look like her mom, but she’s definitely her own person. In early January 2022, as Elite Daily reported, the young UC Berkeley student shared her views on gender and sexuality in an Instagram Story Q&A when someone asked her if she liked “boys or girls.

“I’m attracted to... people! Gender is whatever,” she responded.

Making it clear she’s not about to be bullied, Ava shared in a follow up Instagram Story, “I can [and] will block profiles commenting bigoted/hateful messages under my posts. My Instagram profile is not a place for cruelty/hate speech [and] I intend to keep it that way.”

Reese Witherspoon is proud of her daughter.

Witherspoon herself would probably not be surprised by her daughter’s strength of conviction. In a 2021 interview with InStyle, Witherspoon said, “Ava is so down-to-earth. She wants to do great things in the world. She's studying and learning and trying to find herself. It's a big thing in life to try different things and figure out what is really your path.”

Ava certainly has the kind of mom who will back her up as she finds her path.

Her Son Deacon Phillipe Is 18

Deacon is a loving son.

Deacon Phillipe is an 18-year-old young man who, like older sister Ava, seems to already have a strong idea of who he wants to be. His Instagram bio lists him as an “artist” and he has a popular YouTube channel featuring his own music. As his mom wrote in an emotional birthday post to him in 2021, it’s been a real journey.

“One day he was trading Pokémon cards, singing Bruno Mars songs, and playing American Ninja Warrior in the backyard. The next day, he is taller than me, cooking the family steaks on the grill and making his own music with his best friends,” she wrote. “My heart is bursting with pride about the young man he is becoming. Happy 18th Birthday Deacon! I love you to the moon around the sun and all the stars.”

Both Deacon and Ava were featured in Beyoncé's new Ivy Park campaign, and Witherspoon told Drew Barrymore that her kids “nearly passed out. They were so excited,” when they found out.

To be fair, it is a pretty big deal.

Her Son Tennessee Is 8

The baby of the family, Witherspoon’s youngest son Tennessee with husband Jim Toth is a full decade younger than Deacon. He’s the one who is still keeping her busy with his homework help, so much so that she had a little kitchen dance party with cake when he went off to school in the fall. But he’s also the little guy doing backyard craft projects with her in the sun.

As a super involved mom of three, Witherspoon admitted in a 2021 interview with In Style that her kids take up a lot of space in her brain, “If I told you how much space in my brain they take up every day— do you even think they know? I don't even think they know." It’s nice to know she can get some relaxed downtime with little Tennessee and enjoy the lighter side of parenting.

That’s the beauty of having kids far apart in age. While the older two are out there being their own people, Reese Witherspoon still has Tennessee at home hanging out with her.