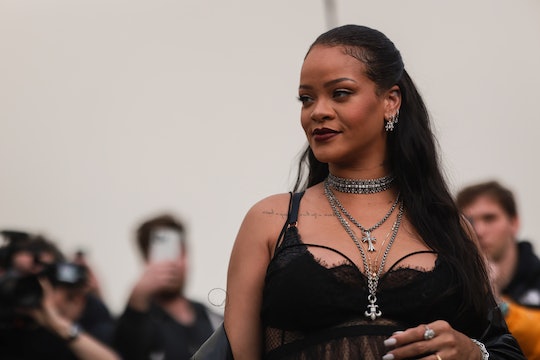 Four months after welcoming her first child, Rihanna has a new gig to prep for — and it’s a big one. The Grammy-winning artist and fashion mogul announced in her first post on social media since giving birth that she will perform at next year’s Super Bowl LVII Halftime Show.

The NFL made the announcement on Sunday and Rihanna later confirmed it on her Instagram page with a photo of her tattooed hand holding up an NFL-branded football. Quite a comeback to Instagram as this was the singer’s first post since giving birth to her first child in May 2022 with her boyfriend, A$AP Rocky. Her last post before this was on May 10.

Needless to say, fans are pumped. “And just like that Super Bowl is the event we can’t wait for,” one fan commented on her post. Meanwhile, Bravo’s Watch What Happens Live! chimed in, “NFL = National Fenty League 👑.”

“Rihanna is a generational talent, a woman of humble beginnings who has surpassed expectations at every turn,” Shawn “JAY-Z” Carter said in an NFL press release. His company, Roc Nation, is one of the executive producers for the halftime show. “A person born on the small island of Barbados who became one of the most prominent artists ever. Self-made in business and entertainment.”

Hip-hop producer Dr. Dre, who headlined 2022’s halftime show in February with Mary J. Blige, Kendrick Lamar, 50 Cent, Snoop Dogg, and Eminem, told Apple Music he is looking forward to the Fenty Beauty mogul’s performance. “I just like her and what she does, and her get down, and how she approaches her artistry and the whole nine,” Dr. Dre said. “It’s fantastic. She has the opportunity to really blow us away. I know we set the bar extremely high.”

This is not the first time Rihanna was tapped to headline the iconic gig. In 2019, she turned down the opportunity to headline in solidarity with activist and former San Francisco 49ers quarterback Colin Kaepernick. “I couldn’t dare do that,” she told Vogue in 2019. “For what? Who gains from that? Not my people. I just couldn’t be a sellout. I couldn’t be an enabler. There’s things within that organization that I do not agree with at all, and I was not about to go and be of service to them in any way.”

What’s more, Rihanna has not made any new music since her 2016 album Anti and her last performance was at the Grammy Awards in 2018. Despite her absence from the scene in recent years, she has managed to become one of the bestselling female artists ever, with more than 250 million records sold worldwide. And at the age of 34, she’s also the youngest self-made billionaire woman in the United States.

So mark your calendars: New mom Rihanna will hit the halftime show stage at Super Bowl LVII on Sunday, Feb. 12, 2023, in Glendale, Arizona.