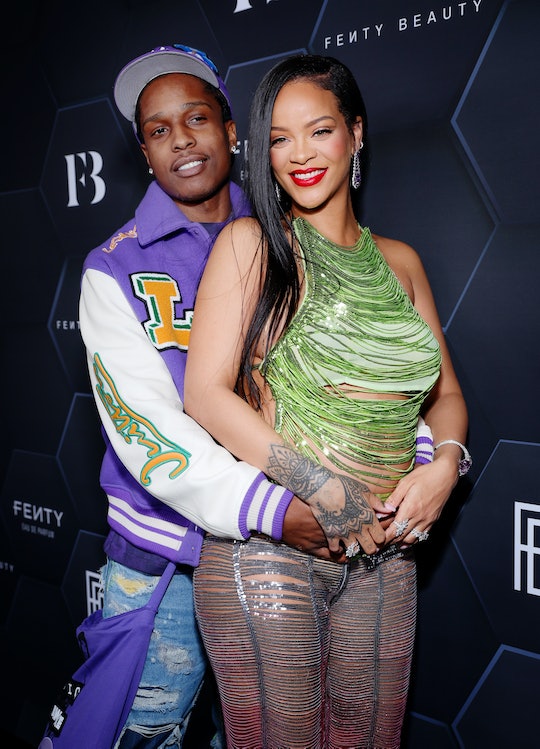 It’s happened! Rihanna is officially a boy mom. The “Diamonds” singer has reportedly given birth to her first child with boyfriend A$AP Rocky, and the world is a little brighter for it.

TMZ reported on Thursday that Rihanna gave birth to her first child on May 13, reportedly a baby boy, in Los Angeles. Romper’s request for comment from the singer’s rep was not immediately returned.

Perhaps unsurprisingly given Rihanna’s intention of keeping her child’s life private, her little boy’s name has not been shared nor any other information in the days after she gave birth. The protective new mom admitted in an interview in March that she planned to be “psycho” about shielding her baby, “You talk about my kids, it’s over,” she told Elle at the time.

The world knew that Rihanna’s due date was near when the singer did not attend the Met Gala in early May but don’t worry; a gorgeous digital statue was erected in her honor featuring her baby belly on proud display.

It’s worth noting that she was a mere 10 days away from welcoming her baby boy at that point.

While not much is yet known about the baby boy, one thing we know for sure based on his parents; he’s going to be a “very fly” baby. A$AP Rocky told GQ in a May 2021 interview that if he was ever to become a dad, “If that’s in my destiny, absolutely. I think I’d be an incredible, remarkably overall amazing dad. I would have a very fly child. Very.” Just one year later, here he is with his baby boy and the woman he called “The One” in 2021.

Rihanna first announced her pregnancy in January with a fabulous photo shoot featuring her baby bump. Since then she’s been casually revolutionizing pregnancy fashion and slowly letting the world know exactly what kind of mother she plans to be. And that’s basically a “don’t ask me about my child” kind of mom. When a reporter asked her to share the sex of her baby, she didn’t say a word because her chilling stare said it all for her. Mind your own business.

Whether Rihanna and A$AP Rocky choose to share their baby with the world or not, it’s enough to know their little boy exists. And those Rihanna genes will continue.