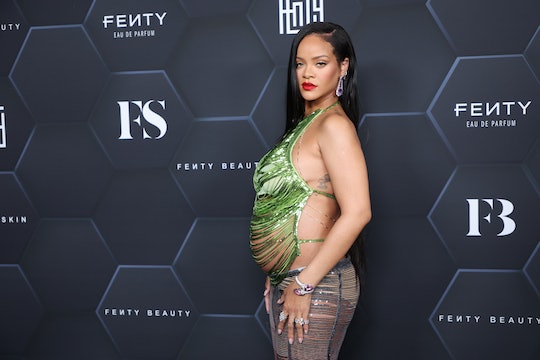 Until she couldn’t any longer.

Rihanna may have kept her pregnancy with boyfriend, rapper A$AP Rocky, a secret from her Navy for a while, but don’t take it personally. The 33-year-old “Umbrella” singer and fashion designer also kept her own friends out of the loop. Well, just until they noticed something was a bit different about their bestie. Specifically, they noticed Rihanna had a picked up a little sweet tooth that she never had before.

In a recent interview with E! News, Rihanna spoke about how it was “hard” to keep her pregnancy a secret from her “posse” because, as friends do, they know her all too well. “They're around me, they know my habits,” Rihanna told E! News. “They're like, 'You don't want something to drink? You're not smoking?' And I'm eating all the things I'm not used to eating. They know I hate sweets and I'm all of a sudden asking for cookies and donuts.”

Rihanna went on to share that she couldn’t keep her pregnancy a secret any longer from her inner circle. “But finally, I just had to let it all out, and they were all shocked, of course, as the world was shocked as well,” Rihanna said in the same interview.

Shock might be an understatement. In January, Rihanna and A$AP Rocky announced they’re expecting their first child together through a photo shoot with photographer Miles Diggs, with the singer’s baby bump on full display as the couple walked through Harlem in New York City. Fans have been so excited for their little one to arrive that they’re even calling for the Savage x Fenty mogul to release a maternity line, like, right now.

While Rihanna told E! News she was nervous to share her pregnancy with her loved ones and the rest of the world until it felt safe, she’s happy she can celebrate now. “When I first found out, it's not real, you know? I was like, 'This is not for real, right?’” she told the outlet. “And then, it was and it's almost like you don't want to get too excited too soon because it's great news, but you...want to see that it's going to see its way through. And I'm so glad that we're this far along and now I can celebrate with everyone.”

Since announcing her pregnancy last month, Rihanna and A$AP Rocky have made a few public appearances. Most recently, the “Diamonds In The Sky” singer was spotted having a night out with her boyfriend after leaving the Super Bowl in Los Angeles in a sheer blue top with her bump on display. Rihanna is definitely having fun with her maternity style, as she recently told People: “I'm enjoying not having to worry about covering up my tummy. If I feel a little chubby, it's like, whatever! It's a baby!”

More Like This
Sesame Street’s Adorable Friends Parody Is A Father’s Day Treat For Dads & Kids
Meghan Markle Calls On Men "To Be Vocal" In The Aftermath Of Roe v. Wade Ending
Ginger Zee Had A Perfect Response After A Troll Asked Her "Who's Raising Your Kids?"
Chris Pratt Says He "Cried" About That "Healthy Daughter" Instagram Post Controversy