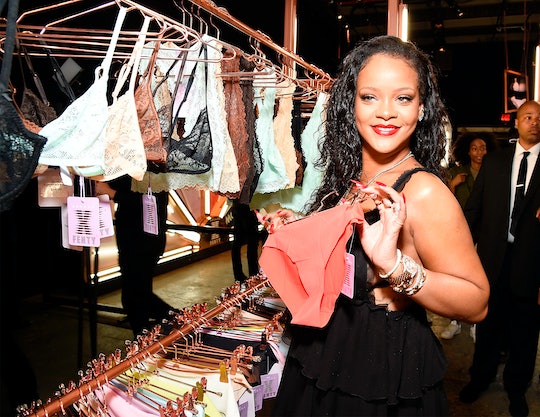 So Does Rihanna’s Pregnancy Mean We’ll Get A Savage X Fenty Maternity Line?

Demand for a Fenty maternity line is high! At least on Twitter...

The announcement of Rihanna’s pregnancy with her first child is not even lukewarm yet and fans are already adding their input for the mogul’s next business venture: a maternity line... hopefully!

On Monday, Rihanna debuted her pregnant belly in a series of photos with boyfriend A$AP Rocky while walking around Harlem and fans have been in a frenzy ever since. Aside from the sex of the baby, due date, and the guest list for what’s sure to be an epic baby shower, the Navy (a nickname for the billionaire’s fans) have entrepreneurial aspirations they hope will come true. Like Fenty prenatal skincare, a cookbook, and maternity line.

Indeed, Twitter has been ablaze with excitement and wishful thinking. The search term “Rihanna maternity line” started trending on the platform within hours of Rihanna’s epic announcement.

If you thought the anticipation over a new Rihanna album was high, daydreaming about a maternity line from the star’s lingerie brand is bound to be even higher. One fan asked, “Does this mean there will be a SavageXFenty maternity line @rihanna?!.”

Who knows, it may be hotter than her lingerie line. Rihanna described her line to late-night host James Corden during a behind-the-scenes look at the recent Savage X Fenty fashion show, now streaming on Amazon Prime. “My foundation is built on inclusion, not just because it’s a thing. That’s a thing because people are making it a thing,” she said. “But I only know my household, me childhood, my mom. She’s a Black woman with curves. I don’t know anything else. So when I make something, I would be an idiot to want to exclude anyone. I don’t care what size you are, what race you are, what religion you come from. I want you to feel like you’re representing — represented here.”

One Navy fan seems ready to drop the coins on it and tweeted, “@rihanna go ahead and drop a Savage Fenty maternity line please and thanks.”

One more tweeted, “Rihanna is pregnant. Let’s get this maternity/ baby line.”

MSNBC’s Hayes Brown also chimed in and tweeted, “rihanna on the phone with Fenty product teams to start developing lines of maternity wear and pre/post-natal skincare like,” and added a GIF of Rihanna rubbing her fingers.

Moms Are Ready To Open Their Wallets

One fan, who is also pregnant, tweeted, “As someone who is 4 months pregnant, I am welcoming Rihanna's maternity line with open arms and wallet.”

“If Rihanna drops a maternity line I have no choice but to get pregnant again,” another tweeted.

And What About A Baby Cookbook? Pregnancy-Safe Makeup?

We can only hope so! One fan is already manifesting the culinary news tweeting, “Rihanna will now give us a maternity line or a baby cookbook.”

The sky is the limit when it comes to Fenty and Riri! After all, Beyoncé released an Ivy Park kids line. Why not add a Fenty maternity to the closet? Rihanna and A$AP Rocky were recently named the best-dressed couple in the music industry. So needless to say, if a maternity line was to happen, the collection would be pure dopeness!