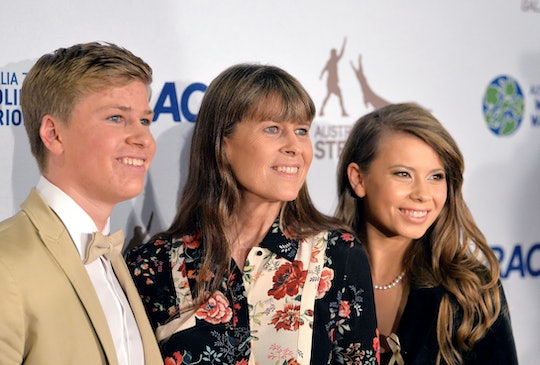 Brothers, am I right?

Leave it to a kid brother to put his foot in his mouth on this level. During a recent interview on live television, Robert Irwin called his pregnant sister Bindi "massive," but don't worry his mom was right there to give him a quick little scold. A good lesson for the teenager for the future... never call a pregnant woman "massive." Or anyone "massive" for that matter.

Robert and his mom Terri Irwin were appearing on Australia's Sunrise On 7 for a live interview to discuss their work as conservationists at the Australia Zoo. Naturally they were asked about Bindi Irwin and her husband Chandler Powell, who are expecting their first baby together, a little girl, some time in the next few weeks. Terri Irwin, widow of the late Crocodile Hunter Steve Irwin, shared the sweet story of how her daughter told her about her pregnancy. "She announced that she and Chandler were expecting on our annual crocodile research trip," she said. "So here we are all out in the bush, and we've been jumping crocs and attaching trackers, and we're all sitting around the campfire, and she says 'By the way...'"

Now that her daughter is just weeks away from giving birth, Terri said Bindi is at "that sweet spot where you really miss seeing your shoes." And this is when Robert jumped in to say, "She's massive now!" His mother nudged him, the news team called out "Robert!" and "spoken like a true little brother," while laughing, and he immediately backtracked.

"In a good way," he added, "no, like, it's special." His face went red, and of course the damage was done. Fortunately, as the 17-year-old pointed out, his sister wasn't there when he let loose with his little faux pas, although he admitted that he knew "I'm in so much trouble. Don't tell her about this please."

Of course, Bindi found out. He didn't help himself with that one. Robert shared the video on Twitter with the caption, "Ha ha... whoops," and Bindi tweeted in response, "'Don’t tell her about this' .... Thanks Robert! Love ya!"

Bindi didn't seem terribly bothered, perhaps because she has a lovely husband like Chandler Powell who proudly posted a picture of her wearing his work shirt on Instagram with the sweet caption, "With our baby girl growing, @bindisueirwin had to borrow my khaki shirt as her’s isn’t buttoning over her gorgeous bump. Love my girls!"

I suspect Bindi Irwin is chalking up her brother Robert's slip up to just sibling stuff. Or plotting her revenge for later. Which is also sibling stuff.