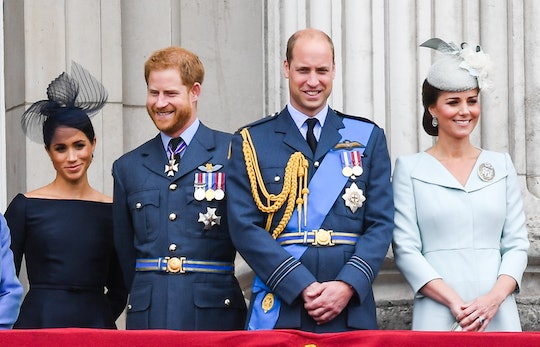 The Royal Family Is "Saddened" By Meghan Markle's Miscarriage

The Duchess of Sussex wrote about her heartbreaking loss in an essay for The New York Times.

As Meghan Markle's poignant, raw essay about a miscarriage this summer Times left royal fans heartbroken for the Duke and Duchess of Sussex, news reports followed of how the royal family has reacted. While it has been some time since Prince Harry's family has seen the Sussexes, they remain just that — family. And the loss has reportedly left them all "saddened.".

In a candid, emotional essay in The New York Times called "The Losses We Share," Markle shared that she suffered a miscarriage in July. As she wrote in that essay, "losing a child means carrying an almost unbearable grief, experienced by many but talked about by few. In the pain of our loss, my husband and I discovered that in a room of 100 women, 10 to 20 of them will have suffered from miscarriage. Yet despite the staggering commonality of this pain, the conversation remains taboo, riddled with (unwarranted) shame, and perpetuating a cycle of solitary mourning."

The mother of 1-year-old Archie wrote about her experience in an effort to end the culture of silence too many women often experience in the wake of a miscarriage. It was an effort to stop the "cycle of perpetual mourning" as she so eloquently wrote.

And the royal family is apparently sharing in that mourning. While neither Buckingham Palace nor Clarence House, the official home of Prince Harry's father Prince Charles, released an official statement, a palace source told People that the family is "understandably saddened" by the news, adding "there is a lot of sadness around the family."

Another royal source told The Daily Beast that the family had been informed by Prince Harry about the upcoming essay. While there was no word on who had been told, it's presumed Queen Elizabeth, Prince Charles, and Prince Harry's brother Prince William all knew.

In the months since Prince Harry and Markle left the United Kingdom to move first to Canada and then California, the royal family has not said much about the couple. This is pretty typical for the royal family, of course, who tend to avoid public statements about private matters if at all possible. But that doesn't necessarily speak to their private experience. They are more to the royal family than their roles; they are siblings and children and grandchildren. As Queen Elizabeth said in a rare statement about the couple in January, "Harry, Meghan and Archie will always be much loved members of my family. I recognize the challenges they have experienced as a result of intense scrutiny over the last two years and support their wish for a more independent life."

Pregnancy loss affects the whole family, and Markle's decision to open up about it speaks to a particular kind of generosity. She wrote about her loss because she doesn't want anyone to suffer alone, in silence. It's an important lesson for everyone. Royal family included.