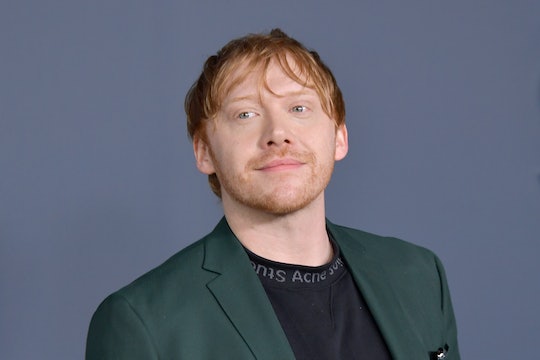 If you hear a toddler cursing in a toy store, it might be Wednesday Grint.

It is the eternal problem for parents of toddlers. When they inevitably swear, how do you avoid laughing? Don’t ask Rupert Grint or his partner Georgia Groome, because apparently they haven’t figured it out. In an interview with The Tonight Show, Grint admitted that his toddler daughter says the F-word. Like, frequently. And he sort of gets a kick out of it, just like the rest of us. Because, let’s be honest, toddlers swearing is funny.

The Harry Potter star welcomed daughter Wednesday G. Grint (which sounds like a Harry Potter name if you ask me) in May 2020, and since then he’s apparently been living his best dad life. “Loving it, it’s brilliant,” Grint told Fallon about fatherhood, admitting he likes it more “now [that] she’s kind of talking and doing things because for so long, babies just don’t do anything.”

The Servant actor explained that his daughter hangs out in his dressing room when he’s preparing his performance, and his character swears a lot. Wednesday picked up on it. “Now she just says it whenever she’s excited. I took her to a toy store today, and she was just walking around dropping [the F-word].”

How do he and Groome react? “We find it hilarious so it’s kind of encouraging it.”

Perhaps it’s easy to laugh off an adorable little toddler walking around swearing in a toy store when you’re just so darn happy to be a parent. In January 2021, Grint got effusive about how fatherhood changed him in an interview with Glamour. “I feel a lot more — I don't know, weirdly relaxed,” he told the magazine. “It’s been a very calming process for me. Obviously there are days when she is FULL on. But there’s something really nice about the routine. It’s got me in a good place, I think.”

That being said, Grint told Esquire that he was “terrified” in the beginning. “I don't want to go too into detail, but the first night was just terrifying,” he shared. “You can't sleep at all, just constantly checking that she's breathing.”

Rupert Grint’s early days of fatherhood check all the boxes. The terror, the joy, the swearing toddler. Check, check, check.