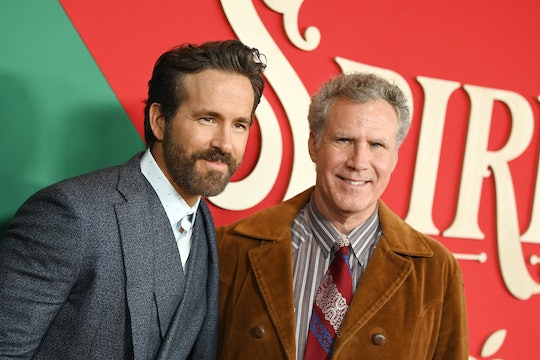 Ryan Reynolds' Daughters Have Watched Elf Thousands Of Times, Just Like The Rest Of Us

Ryan Reynolds is starring in the new Christmas movie Spirited, and like all parents he might even be hoping to get some extra cool dad points with his three little girls. So many of his movies are for older audiences, it has to be exciting for him to share a holiday film they might be able to enjoy as well. And hopefully they will enjoy it, just probably not as much as they already enjoy another holiday classic. The 2003 movie Elf, starring his Spirited co-star Will Ferrell. Reynolds’ daughters have already declared Elf a firm family favorite just by watching it thousands and thousands of times.

Reynolds told People that his three daughters with Blake Lively, 7-year-old James, 6-year-old Inez, and 3-year-old Betty, visited him while he was on set shooting Spirited, and they were suitably impressed. “They’re very excited because they were on set,” Reynolds told the magazine. “My girls were all there, and they were really blown away.” Perhaps especially because of their up close and personal Buddy the Elf sighting.

“They’ve watched Elf about 10,000 times,” Reynolds said, before going on to joke that his youngest daughter Betty has slightly more mature taste than one might expect from a 3-year-old because she’s “obsessed with Old School.”

It seems the Deadpool actor might have a bit of a chip on his shoulder about starring in a Christmas movie with Buddy the Elf himself. He shared an ad for Spirited on his Instagram page where he complained, “Do you have any idea what it’s like to be in a Will Ferrell Christmas movie that’s not Elf?” The two decided to preempt any possible complaints viewers, or maybe even Reynolds’ own daughters, might have about Spirited by reminding people that “it’s not Elf, it’s not Deadpool either. It’s a musical, it’s funny, and it’s on Apple TV+.”

While he might be worried that his daughters are expecting more Elf, Reynolds is still excited for Christmas. Especially since he tells People that wife Blake Lively, “is obsessed with it, loves it. I am too. I love having Christmas. I like the lead up to it the most.”

It can’t hurt that he now stars in his very own Christmas movie with Mr. Christmas himself, Will Ferrell, either.

Spirited, which is a musical retelling of Dickens’ A Christmas Carol told from the perspective of the spirits, stars Reynolds, Ferrell, and Octavia Spencer and will be available to stream starting Nov. 18 on Apple TV+. Just as the two men said.