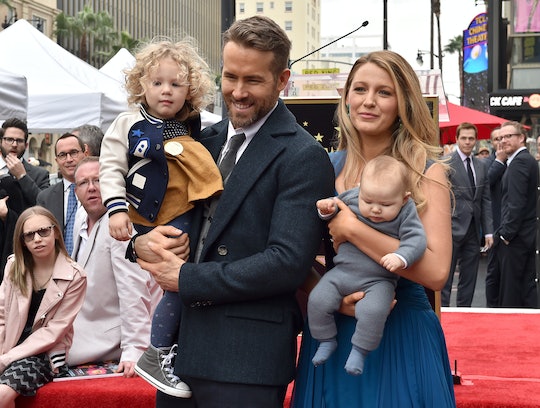 He's not forthcoming on too many details about his family most days, so when Ryan Reynolds opens up about his time with kids in quarantine it's kind of a big deal. Especially since anyone who has followed the Deadpool actor on social media knows he is going to be hilariously honest about his role as a girl dad.

Reynolds spoke to TODAY's Hoda Kotb on Friday to promote his new kids' movie out next week, The Croods: A New Age, where once again he voices the character "Guy" (as he did in the 2013 original). He also talked about his time during quarantine, where he has been spending lots of time with his wife Blake Lively and their three daughters, 6-year-old James, 4-year-old Inez, and 1-year-old Betty. He admitted in his interview that he has been pretty fortunate during the COVID-19 pandemic quarantine. "The best I would say is the time spending with family, with my kids, having an incredibly concentrated amount of time with them during a period in their lives that I'll never get back,” he said.

The downside? "If I'm to pick the worst thing, it's probably the incredibly concentrated amount of time I've had with my kids in a time that I'll never get back, so… being totally frank here.”

That sounds about right.

Ryan Reynolds is of two minds when it comes to quarantine with kids.

Reynolds, like parents all over the world, might have his good days and bad days when it comes to being in quarantine with his kids, but it seems he has discovered a new cool cat to hang out with: his youngest daughter Betty. In an interview for Entertainment Tonight, Reynolds said that Betty is his favorite person to hang out with these days. "I have a new baby. She's a little over a year now, so I really like hanging out with her. It's fun watching her grow up."

Undoubtedly it's just as much fun hanging out with James and Inez as well. Especially since they're big fans of his new movie. Reynolds told Kotb that his daughters were treated to a sneak peek of the movie and loved it. "My kids went absolutely bananas for it. They're still running around the house making Belt sounds, my sidekick (played by Chris Sanders), and going ‘Bam, bam, bam,' whenever something scary happens.”

With three little girls running around the house during quarantine, something scary is bound to happen at pretty regular intervals. Good thing Reynolds has a sense of humor about it all.