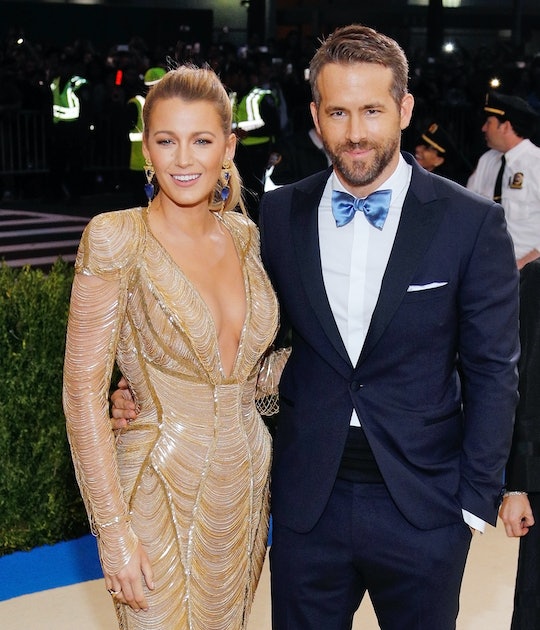 Although they're adamant about maintaining their daughters' privacy, we do know a little about Ryan Reynolds and Blake Lively's kids, thanks to a few sweet updates from them parents themselves. They don't open up about their three daughters often, but when they do, it's either incredibly sweet or just plain hilarious.

Lively and Reynolds became parents for the first-time when they welcomed their oldest daughter, James, in 2014. Since then, the couple has gone on to welcome two more little girls, Inez and Betty, an outcome Reynolds especially loves. In November 2020, Reynolds opened up about being outnumbered by girls in his household in an interview with Access Hollywood. "I love being a girl dad," he said. "I have three daughters, which I never in a million years would have imagined," he said. "I come from all boys. I have three older brothers. I'm the youngest of four boys so for me to have three daughters has been such a wild ride and I love every second of it."

While Reynolds and Lively are very, very famous, the couple rarely talks about their daughters and opts to keep them off Instagram. But when they do decide to gush about their girls, it's a real treat. Here's a sampling of what the couple has shared about their seriously cute kids.

The couple's oldest daughter James was born on Dec. 16, 2014. Reynolds has since revealed that she was named after his late father, James Reynolds, who died in 2015. "My father just passed away," Reynolds said during an appearance on Good Morning Britain that same year. "But my daughter is named after him."

Lively has said that her oldest daughter has opinions on her outfits and Reynolds has tweeted about the hilarious things their 5-year-old has done over the years. In an interview on The Tonight Show with Jimmy Fallon in 2019, Reynolds revealed that James wants to be a child actor. "I'm fine if she wants to be an actor," he said. "I'm like, 'Fine, go ahead, like, you know, in school do like after-school stuff like that — that's fine.' And right now, every day is like, a recital. She's singing songs. She's doing little plays at home, all that stuff."

James might have already gotten a head start on her career; her voice can be heard at the beginning of Taylor Swift's 2017 song "Gorgeous."

The couple welcomed their second daughter Inez in September 2016, according to Us Weekly. And yes, it's spelled Inez, not Ines. Lively confirmed this to People in 2017. "I had a new baby, Inez, with a 'z' even though everyone says it's an 's.'," Lively said. "I don't know why, please tell Wikipedia."

From what the parents have said, it sounds like Inez has quite the personality. In a 2017 appearance on The Tonight Show with Jimmy Fallon, Lively referred to her as a "baby viking," telling Fallon about Inez's love of red meat. "I made a Cookie Monster cake ... and she just looked at it and reached for a steak. She was hand-fisting two steaks. Her sleeves were dripping in blood from steak."

As for Reynolds' take, during an appearance on Live! With Kelly and Ryan last year, he said that his now 4-year-old daughter is "shady." "She's super into villains," he said. "We watch Beauty and the Beast and her favorite character is Gaston." This falls in line with what Lively has most recently said about Inez and her reaction to her little sister.

During an appearance on The Tonight Show with Jimmy Fallon earlier this year, Lively described the moment her daughter warmed up to her younger sibling. "So in the beginning our oldest is loving on her, and like very maternal, and our middle daughter just keeps away from her," she said. "So I said to her, I said 'You're gonna teach her everything she knows! You get to teach her about cities, and the sky, and flowers, and Santa Claus, and Mickey Mouse — anything you want.'" This sold Inez on her newborn sister, who apparently told her "Aw. I didn't love you but now I do."

The couple has still not revealed the day their third daughter was born, but Lively reportedly gave birth to her in August 2019, according to Us Weekly. Furthermore, the couple has neither confirmed or denied their daughter's name, but fans have been led to believe her name is Betty. Taylor Swift, Lively and Reynolds' close friend, debuted a song named "Betty" this year, which features the names of the couple's daughters. In a radio interview, Swift confirmed that this wasn't a coincidence. "I named all the characters in this story after my friends' kids," she said.

While they haven't confirmed a few details, Reynolds has revealed that he does love spending time with his youngest daughter. "I have a new baby," Reynolds told Entertainment Tonight in November while promoting his new film, The Croods: A New Age. "She's a little over a year now, so I really like hanging out with her, 'cause it's fun watching her grow up."