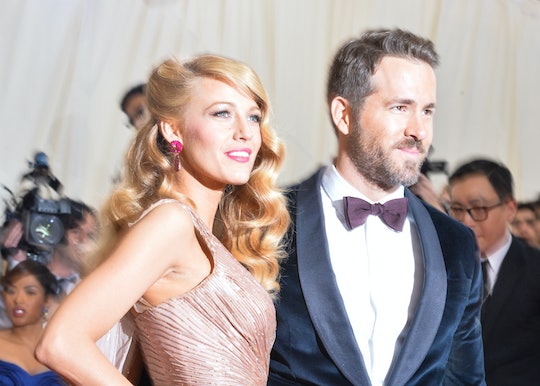 Taylor Swift's newest album isn't just full of catchy new bops, but it may even reveal what Blake Lively named her third daughter whom she welcomed with husband Ryan Reynolds last year. Really. The couple has been keeping her name under wraps since she was born, but their pal Taylor Swift might have revealed a strong hint about the little one's moniker in a new song.

Swift's new album Folklore that dropped on Friday features a song called "Betty," and within hours of its release, Twitter was abuzz with all sorts of different theories about "Betty" in particular. And one of those theories has to do with Lively and Reynolds' three daughters, 5-year-old James, 3-year-old Inez, and a baby girl born in October whose name has not been released. Maybe until now.

Why? As fans have pointed out, the song "Betty" features the names of both Reynolds and Lively's older daughters. In one stanza Swift sings: "You heard the rumors from Inez/You can't believe a word she says/Most times, but this time it was true/The worst thing that I ever did/Was what I did to you."

In the next she mentions James: "She said 'James, get in, let's drive'/Those days turned into nights/Slept next to her, but/I dreamed of you all summer long."

And this has fans thinking that Lively and Reynolds might have named their third daughter... Betty.

Now keep in mind that neither Lively nor Reynolds have confirmed or denied their daughter is named Betty, but certainly fans seem to have taken hold of the idea.

"Okay but I love this theory also because I definitely noticed that their other kids names were in the song too... suspicious," one fan tweeted, while another asked, "Am I the only one that realized that Taylor Swift’s song Betty has both of Blake Lively’s kids names in it? Is Blake’s third baby named Betty?! I am so invested in this new theory now."

It would certainly make sense for Swift to know the name of Lively's third daughter since the two are reportedly close friends, with the actress being photographed at the singer's 30th birthday party in an Instagram post in December. And, of course, let's not forget that James was actually featured in Swift's song "Gorgeous," so there's a history there.

As for the name Betty... I can see it. Especially considering Reynolds' close friendship with Hollywood icon Betty White. He and The Proposal co-star Sandra Bullock famously serenaded White on her birthday in January via social media. And the couple do have a history of naming their daughters after people they love; according to E! News, their oldest daughter is named for Reynolds' late father James, who died in 2015.

I admit I will be massively disappointed now if their third daughter is named something other than Betty.