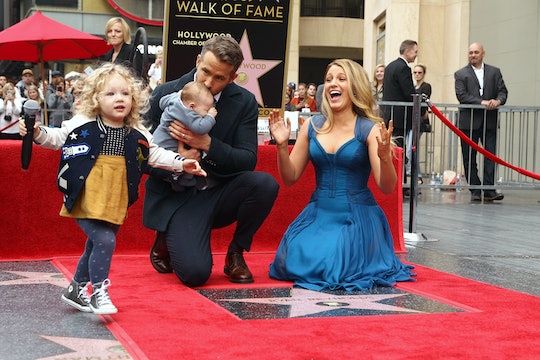 Blake Lively's Daughter Had An Unexpected Reaction To Her Little Sister

Uh oh. Blake Lively's daughter, Inez, was unsure about her newborn sibling when the actress and her husband, Ryan Reynolds, brought her home last year. But the good news is, she seems to be adjusting quite nicely.

During an appearance on The Tonight Show Starring Jimmy Fallon, Lively revealed that she did, indeed, give birth to a daughter sometime in 2019. While this was such an exciting time in her family's lives, their two daughters — 5-year-old James and 3-year-old Inez — had two completely different reactions to their little sister. James, being the oldest child, was thrilled, Lively said. "My oldest is very into the baby," she said. But Inez, now a middle child, needed to take some time to warm up to her little sis. "She sort of pretends to play with her," she shared.

"So in the beginning our oldest is loving on her, and like very maternal, and our middle daughter just keeps away from her. So I said to her, I said 'You're gonna teach her everything she knows! You get to teach her about cities, and the sky, and flowers, and Santa Claus, and Mickey Mouse — anything you want.'"

This made Inez sold on her sister, who told the newborn, "Aw. I didn't love you but now I do."

At least she loves her!

Needless to say, having three children has been a bit of an adjustment — not just for her daughters, but for herself, too. Lively told Good Morning America earlier this week that having three little ones under the age of five is harder than it looks. "It's like going from two to 3,000," she said. "We have so many children. It's pretty crazy — we're outnumbered and, you know, it's a lot."

"People say that like from two to three it's the same, you know, it's kind of easy. Those people do not have three kids. It's crazy."

While Lively has been more willing to share details about her life as a mom of three, she's been pretty quiet about her youngest. People still don't know what her daughter's name is or even know what month she was born in last year. But for now, these super adorable anecdotes about her three daughters will suffice.