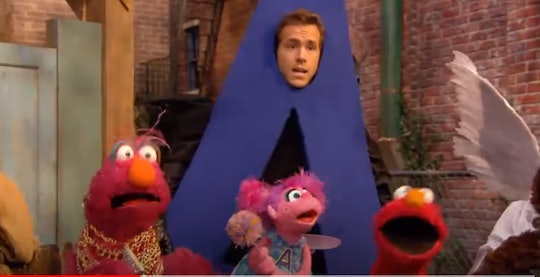 Ryan Reynolds Made Dirty Joke About His, Uhmm, "A-Hole" Costume On Sesame Street

Get ready for a classic, albeit raunchy, dad joke.

It was a joke 10 years in the making, and it was worth it. After appearing as the letter 'A' in 2010, Ryan Reynolds tweeted about his costume on Sesame Street and, yes, it took a raunchy turn. But let's face it, parents need a laugh sometimes too so it's all good.

Reynolds' appearance on the classic PBS show in 2010 looked like a blast. He was part of the 'A Team' along with Abby Cadabby, Elmo, and Telly Monster. The Deadpool actor must have lobbied pretty hard at Sesame Street because he got the starring role as the letter 'A,' which he looked genuinely excited about. Apparently looks can be deceiving...

On Jan. 24, a Twitter user took some screenshots of Reynolds in his letter 'A' costume and tweeted, "Watching a little @sesamestreet with the kiddo, and its an episode with @VanCityReynolds and the gang doing an A-Team gag. Its a delight, for both me and the kiddo."

Reynolds, who is well known for engaging on Twitter in unique and surprising ways, retweeted this parent's comment and added a little background information about his hallowed time as the letter 'A.' The dad of three tweeted, "I remember how challenging it was to sing because the A-hole was so tight. But I pushed through because kids all over the country were counting on me."

I mean, of course he went there. I'm just surprised it took him a decade.

Ryan Reynolds was the letter 'A' on 'Sesame Street.'

Maybe Reynolds needed to become a dad himself before delving into inappropriate dad jokes; in 2010 he was still two years away from marrying his wife Blake Lively. Two years later, he became a dad to baby girl James in 2014, then welcomed daughter Inez in 2016, then a third daughter Betty in 2019. Now that he's a dad of three, I guess he's delving into some vaguely dirty dad jokes.

And people are loving it. Well, most people. CNN's Jake Tapper simply wrote, "Ryan" in that way where it seems like Reynolds is in trouble.

Otherwise, people were fans. One social media user wrote, "The speed at which you veer back and forth between filthy and wholesome is delightful." Another thanked him for making her laugh, writing, "@VanCityReynolds, you sir, are a magical gift to all the exhausted public health folks."

Whatever you think of a-hole jokes, you have to give Ryan Reynolds credit for one thing; he's always there for a good laugh. And right now, what's better than that?