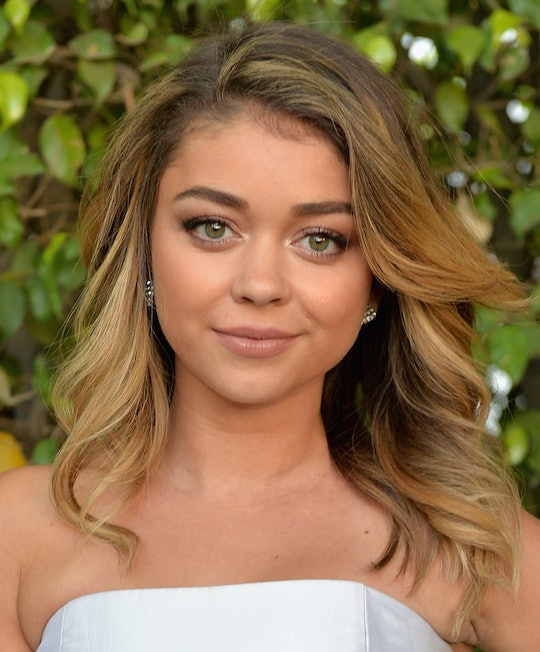 Sarah Hyland, who played popular-girl-with-a-heart-of-gold Hayley Dunphy on Modern Family, just tied the knot with Reality TV star Wells Adams. And both her families turned out — her “real” on and her on-screen one. Several of Hyland’s TV relatives from the smash hit family comedy took to social media to share pictures of the wedding: Sofía Vergara, Jesse Tyler Ferguson, Ariel Winter, Nolan Gould, and Julie Bowen were all dressed to the nines and on hand to celebrate the beautiful bride on her big day.

The 31-year-old actress got engaged to Bachelorette alum Adams in 2019 and celebrated their matrimonial announcement on Instagram. The couple then hit a roadblock when they postponed their nuptials due to Covid-19. “She got robbed of all that kind of fun stuff that you get to do as a new bride, so I think we're going to try to hit reset and do it all again," Hyland’s then-fiancé told People.

But it looks like everyone made up for lost time and had a great time at the wedding. First up, Sofía Vergara, who brought her son Manolo as her date and posed on a sports car in a beautiful black-and-white floral dress. The actress, who played fiery Gloria Pritchett on Modern Family, also posted a a few cute shots of her costars on Instagram, including a great candid. “#sarahandwells wedding❤️❤️❤️❤️,” Vergara captioned the post.

Ferguson, whose husband Justin Mikita was also in the picture, was quick to jump into the comments with some banter. “Everyone looks terrible or is hidden except you and Justin. I wish you two a long happy life together,” wrote the dad and actor, as if channeling the character of Mitchell Pritchett.

Julie Bowen, who played neurotic mom Claire Dunphy, also shared some pictures of her “fake family,” while Ferguson did double duty as wedding officiant and guest. “My queen and king FINALLY had the most epic of weddings. I love you both so so much. What a magical few days. ❤️,” the actor’s husband captioned a post.

But the cutest shot to hit the social media rounds had to be the one on Ferguson’s Instagram stories that captured a sweet sibling moment between the bride and Ariel Winter, who played smartypants middle sibling Alex Dunphy on Modern Family. “Sisters for-eves,” Ferguson wrote above the TV siblings and their back tattoos.

As is customary for celebrity shindigs, the bride donned more than just one stunning dress at her California winery wedding. Hey, if you’re lucky enough to wear two gowns when you get hitched, you might as well have two sets of families in attendance too.