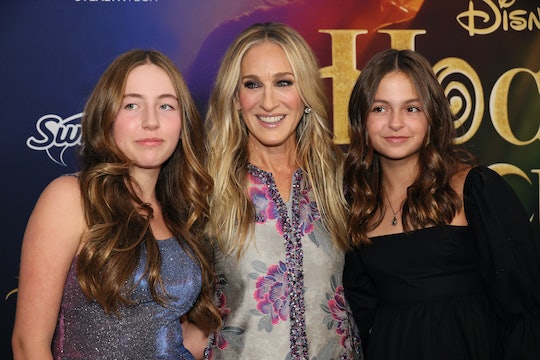 They both wore heels designed by their mom.

Sarah Jessica Parker tends to keep her kids away from the spotlight as much as possible, but sometimes there is an event so momentous and exciting, she obviously needs to include them. Because if you are a Sanderson Sister heading off to the premiere of Hocus Pocus 2 after nearly 30 years of waiting, it would be egregious to keep your kids at home. Although knowing those Sanderson Sisters and their appetite for children... perhaps she was taking a bit of a risk by bringing her twins with her.

On Tuesday night, the proud mom of three brought her 13-year-old daughters, Hazel and Marion, to the New York City premiere of Hocus Pocus 2 ahead of the film’s launch on Disney+ on Friday. They were joined by husband Matthew Broderick, while the couple’s oldest son, 19-year-old James Wilkie, did not attend. Probably because he is busy being a cool college kid now.

Fortunately for Parker, her twin daughters are at peak Hocus Pocus 2 age. And they both looked pretty excited to be there for the premiere. They were also both reportedly wearing shoes from their mom’s SJP Collection.

It makes sense that Parker would want to introduce her daughters to an event that is clearly special to her, the sequel to a movie that was made almost two decades before they were born with friends like Bette Midler and Kathy Najimy. The three Sanderson Sisters “just fell right in” together, according to Hocus Pocus 2 producer Adam Shankman. "[It was] like a snap back in time, as if time had not [passed]," Shankman told People. "They were just laughing, laughing, laughing. ... It was easy."

Not all of SJP’s projects have been kid appropriate — and making movies isn’t always compatible with raising children. As Parker once said, “I wanted a family, but before I had a family I was a career person. I’ve tried to marry those two things, and sometimes it is successful, and sometimes it is not.”

I think it’s safe to say from the smiles on her daughters’ faces at the Hocus Pocus 2 premiere, this was one of those times where it was successful.