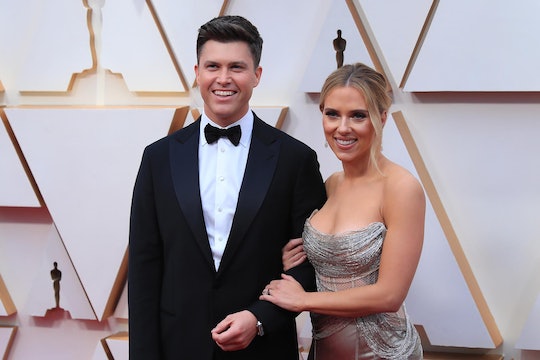 Scarlett Johansson Explained The Meaning Behind Her Son Cosmo's Name

The name has a lovely connection to her daughter.

When Scarlett Johansson and Colin Jost named their baby boy Cosmo, their choice was apparently based on several different reasons. One of which being a sweet connection to her 8-year-old daughter Rose, who was very pleased with the choice. Unlike Jost’s mother, who took a minute to get accustomed to the unique name.

The Avengers star sat down for a chat with fellow mom of two Kelly Clarkson on her talk show on Monday, and as so often happens with two moms, the conversation turned to their kids. When Clarkson asked her how she came up with the name Cosmo for her baby, Johansson jokingly replied, “Oh I don’t know, we just threw a bunch of letters together and said, ‘That works.’”

Johansson went on to explain that she found it “so charming,” and Clarkson noted that she thought it was nice that both of Johansson’s kids had names based on flowers. “They are both flowers,” the proud mom noted. “Not a lot of people make that connection. Cosmo is a really sweet little flower that comes in different shades of orange and yellow.”

While her daughter Rose was a fan of the name, especially its connection to her own floral-based name, there was one member of the family who would have preferred to give it a pass. Her mother-in-law. Johansson told Clarkson, “She kept suggesting other versions of it and I'm like, 'No, he's already here, he's out.’”

Jost also admitted that his mother lobbied pretty hard for some other names when she found out this choice was being considered final. The Saturday Night Live star told Seth Meyers in an interview on Late Night last October that his mother’s response to hearing the baby’s name was not ideal. “‘And, now, is it final? Like, did you submit the birth certificate?' And we're like, 'Oh, yeah, we did that at the hospital.’ She was like 'Oh okay, interesting. Because I was reading that there's also a name Cosimo with an "I" so that could also be an option. Maybe you call him Cosimo, that's his real name, but then you can call him still Cosmo.’”

Of course she eventually got accustomed to the name. Maybe reminding her that it was based on a flower like little Rose helped. Or maybe she secretly calls him something else... who can know for sure?