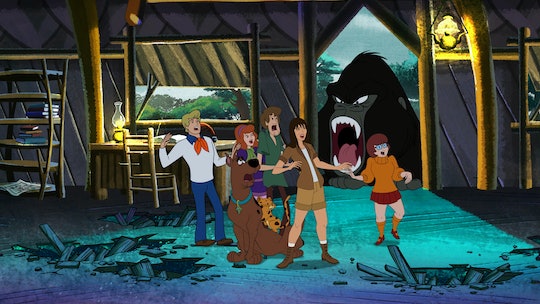 Get in the Halloween spirit and celebrate Scoobtober with a month-long line-up of great Scooby-Doo movies and shows!

The air is getting chillier, the leaves are getting brighter, and Halloween is in the air. Yes, it’s that time of year again, and what better way to get in the spirit than with everyone’s favorite mystery-solver-and-ghoul-unmasker, Scooby-Doo! For the month of October, HBO Max and Cartoon Network are celebrating everyone’s spooky pup with Scoobtober, a month-long line up of new and classic Scooby cartoons!

Beginning Friday, Oct. 1 on HBO Max, you and your kids can enjoy and entire month of scoobtastic programming with movies, Halloween specials, and new episodes of Scooby-Doo and Guess Who? featuring not only Scooby and the gang, but a star-studded line-up of special guests! (Yes, scoobtastic is a word now; no, don’t look it up.)

The festivities kick off with the new season of Scooby-Doo and Guess Who?. Scooby, Shaggy, Velma, Daphne, and Fred team up with pop culture icons to solve their toughest mysteries yet. The crew of Mystery Inc. will travel up a lost river in the Amazon Rainforest with Jason Sudeikis, hitch a ride on Cher’s yacht, visit Lucy Liu’s art gallery, and more. And, of course, you can bet that the mysteries will be just as bountiful as the celebrities, who also include Sean Astin, Joseph “Run” Simmons, Billy Dee Williams, Terry Bradshaw, Carol Burnett, and Frank Welker!

Get a taste for what’s in store with the trailer for the new season of Scooby-Doo and Guess Who?

In addition to new episodes of Scooby-Doo and Guess Who?, families can tune-in to Cartoon Network every Sunday from 9 a.m. to 12 p.m. ET/PT, beginning Oct.3, to catch two Warner Bros. Home Entertainment movies from the Scooby-Doo library, including Scooby-Doo! The Sword and the Scoob; Scooby-Doo! and the Gourmet Ghost; and Happy Halloween, Scooby-Doo! You can also stream all 28 Scooby-Doo movies on HBO Max for the entire month as well as the popular library animated series Be Cool, Scooby-Doo!

Scoobtober begins on Friday, Oct. 1 and will continue through Halloween night.