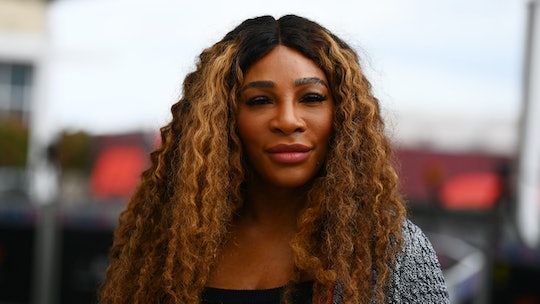 “King Richard, but I call him daddy.”

It's precious grandparents moments like this that are too precious not to catch on video. On Tuesday, Serena Williams shared a touching video of her father, Richard Williams, spending some quality time with his granddaughter, Olympia.

In the video, the 79-year-old proud grandfather was recording the 4-year-old on his phone as she rode her training bicycle down the sidewalk. And from the sidelines, the tennis pro was recording both of them to capture the sweet moment. “A rare sighting, the one, and only G.O.A.T. still motivating,” she captioned the video. “King Richard, but I call him daddy,” she added, referring to the biopic starring Will Smith, that is based on her father’s life.

King Richard premieres in theaters and on HBO Max Nov. 19. The movie will tell Serena and Venus Williams’ origin story from Compton and how their father motivated and coached his daughters to become the tennis legends they are today.

In an interview with Entertainment Weekly, Williams said the movie was made from their father’s point of view. “There are so many ways to tell this story,” Williams said. “But I think telling it through my dad was the best way because he had the idea. He knew how to do it.” She added King Richard will be a story she could share with her own daughter. “She gets to see what Mommy was like," she said. “I always wondered how I would explain my life. Like, how will I even start that conversation? This is the perfect way.”

But back to Olympia, it’s nice to see her getting her bicycle training on! Those training wheels will be off in no time, with the help of her grandpa! And when he is not around, Serena keeps his lessons alive in priceless, mother-daughter moments she shares on her Instagram. Back in June, for instance, she posted a series of reels coaching Olympia on tennis basics she learned from her dad.

“You know what Grandpa taught me?" she told Olympia in the video, “First thing you do is turn. Back, reach, hand, follow-through. That's very complicated for a 3-year-old, but you might get it.” Between tennis and her bike, no wonder her mom and grandpa can’t stop recording her.