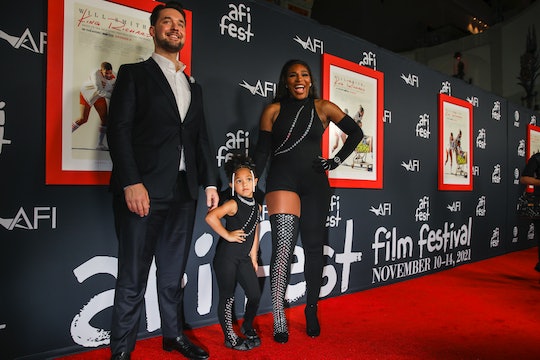 All eyes were on Serena Williams and her daughter Olympia at the red carpet premiere of King Richard in Los Angeles on Sunday night. The mother-daughter duo twinned in rhinestone-covered black bodysuits with matching thigh-high boots rhinestone boots. (Olympia’s shoes were flats, of course.) Williams’ husband Alexis Ohanian matched their style in a sleek, black suit.

Designed by David Koma, the Grand Slam tennis pro was inspired by the look after seeing it on the runway. “I’m wearing David Koma, I saw this look on the runway and I was like this is what I need to wear for the premiere,” she told Access Hollywood.

Before posing for photographers, Ohanian shared some snaps with Olympia ahead of the premiere on his Instagram, and she looked ready to hit the red carpet. “Getting ready for #KingRichard,” he captioned the photos. “Everything for @olympiaohanian.”

King Richard is an especially personal movie for Williams. The film tells the story of Richard Williams, the father of Venus and Serena, and his role in shaping them into the athletes and women they are today. Will Smith stars as Mr. Williams, while Demi Singleton and Saniyya Sidney play Venus and Serena.

As a father, Smith found a special connection to Richard Williams while working on the movie. “After my children were born, I had that same thing of trying to cultivate young, contributing humans,” he shared with Entertainment Weekly. “Willow showed me the difference between how you would go at a boy and how you would go at a young woman going into the world of competition, so King Richard was just uniquely timed in my life. There was a comprehension of all of the different angles that I have now over 50, that I wouldn't have been able to even conceive at 40.”

Williams also shared with Entertainment Weekly how she hopes the film will help give her daughter a better idea on what her own upbringing was like. “She gets to see what Mommy was like,” the tennis legend said. “I always wondered how I would explain my life. Like, how will I even start that conversation? This is the perfect way.”

More Like This
Watch An Exclusive Sneak Peek At 'The Amazing Maurice'
Marcel The Shell Is Heading To The Oscars!
Pixar’s 'Turning Red' Is Nominated For An Oscar — Here’s How To Watch It Right Now
Marcel The Shell Is Officially An Oscar-Nominated Movie Star
What Parents Are Talking About — Delivered Straight To Your Inbox