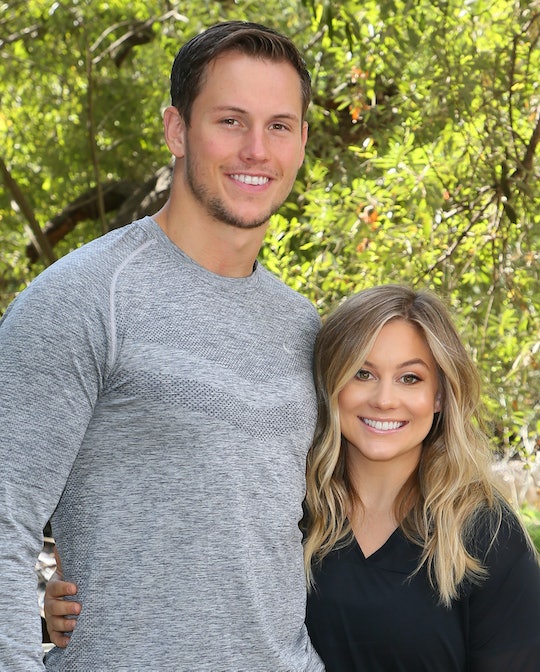 Shawn Johnson East’s husband Andrew East just got an invaluable lesson in pregnancy. As the Olympic gymnast gets closer and closer to delivering the couple’s second child, a baby boy, this summer, she decided it was time to give her husband a taste of how it feels to carry a growing baby in your body. How did she do it? By strapping a 14-pound ball to East’s stomach. And the football player had a heck of a time trying to manage that weight.

Johnson and East took to the gymnast’s TikTok page to share their experiment in “trying to build empathy” as she described it. The couple are already parents to 18-month-old daughter Drew and expecting their second baby in the coming months, so Johnson already has ample experience with carrying a baby in her third trimester. East? Not so much.

To that end, Johnson gave her husband a 14-pound medicine ball to strap to his stomach while reminding him, “the average weight gained by a woman is 30 pounds, this is only 14.” She is correct; the U.S. Centers for Disease Control and Prevention (CDC) recommends gaining between 24 to 35 pounds during pregnancy, so East got off light.

Not that he saw it that way. In the first TikTok video when Johnson was strapping the ball to her husband’s belly, she kept count of all the complaining. Within 17 seconds he had complained five times. About feeling irritable, a sore stomach, sore quads, the list went on. That was before he even had to move around.

East admitted in the follow-up video that he was “nervous for whatever is about to go down,” and quickly found out that he was about to go down. To get in bed and try to get back out. He struggled to sit up and asked Johnson to give him a hand; she said no. Eventually he did what so many pregnant women have done before; rolled on to his side, slid to his knees, and then pushed himself up.

Naturally, fans loved the video. One fan wrote on TikTok, “He needs to do a day in the life with that thing strapped onto him,” while another noted he should try it while also carrying Drew as his wife has done, “Walk through a small area. Get in and out of the car. Carry Drew around. Do handstands like Shawn. Put shoes on!"

Perhaps this empathy experiment could go a little further as Johnson’s fans suggested. After all, East didn’t have to experience bladder issues, exhaustion, irritability, heartburn, or a kicking human inside the ball. He did sort of get off easy.