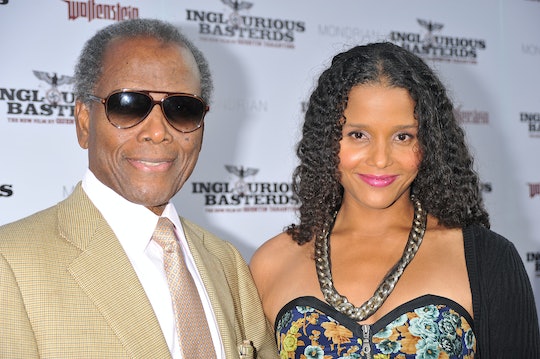 “I will look for you among the stars where you will surely be.”

When Sidney Poitier died last week at the age of 94 years old, he left behind a monumental legacy. As a civil rights activist, a groundbreaking actor, a writer, and a man of lasting influence in Hollywood. Poitier will be missed by the world, of course, but he will be missed most of all by his family as dad to six daughters. And his youngest daughter Sydney wrote a moving tribute to Poitier that speaks volumes about the great, kind, and loving man he was to his family.

Sydney Poitier Heartsong wrote a beautiful, 800-word love letter to the father she lost. “There are no words for this. No real way to prepare for this. No prose beautiful enough, no speech eloquent enough to capture the essence of my dad,” Poitier’s daughter wrote on Instagram, praising his many professional accomplishments and noting he “blazed a trail” for actors who followed in his wake.

While she is certainly proud of everything he did in the world, what Poitier’s daughter wanted people to know most was “how GOOD he was. I know people know he was good, but I don’t think they know the depth of his goodness.” So good, in fact, that he could never even bring himself to kill a bug.

Sidney Poitier’s daughter wrote a beautiful tribute to her dad.

The proud daughter and actress added, “My grief is because I lost my dad, but it is also because the world lost so much goodness. He was like a lighthouse, warm and bright. No matter the storms whipping around him, he stood unwavering shining in his light. Those of us who were flailing around in the dark waters could always orient towards him and swim for the shores.”

Sydney, who is one of of Poitier’s two daughters with wife Joanna Shimkus along with sister Anika and the youngest of six (Poitier had four daughters with first wife Juanita Hardy), wrote about her father’s final years. When “his body grew weaker and he was unable to communicate.” Still, his innate sense of goodness prevailed. “We thought we were taking care of him. I see now that the truth is he was still taking care of us. He was reminding us, particularly in these uncertain times, of the power of GOODNESS. That even when the body is fading and things seem to be falling apart around us, the goodness remains.”

That goodness, she believes, will live on. “But then I remember that even though his physical body is gone now, his goodness lives on. It lives on in his wife, his children, his grandchildren, in his movies and books, in every warm embrace he offered an adoring fan, every piece of advice he gave to those he mentored, every tiny bug he gently placed outside.”

Sidney Poitier has received so many beautiful tributes and messages since his passing, from Denzel Washington to Barack Obama to Oprah Winfrey and beyond.

It is perhaps this message from his daughter and her profound belief in her father’s goodness that says the most about the legendary actor. “It's his goodness that changed the world, and it will live on forever. I will miss you more than words can express Dad. I will feel you in the warmth of the sun on my back, I will hear you in the wind in the trees and I will look for you among the stars where you will surely be. I love you.”