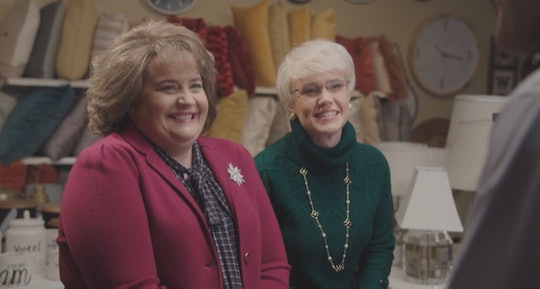 Two moms make it clear it’s all they want for Christmas.

Two moms really want grandchildren for Christmas in a new Saturday Night Live skit that will absolutely feel relatable to just about everyone. Parents who are ready for grandkids, their children who might not be ready and are feeling the pressure, and Paul Rudd, the director of a commercial who just needs these moms to stop asking for grandchildren so he can finish his job for the day.

Paul Rudd hosted a scaled-back Christmas episode of the sketch comedy series on Saturday due to cases of the Omicron variant rising in New York, but he had actually filmed this hilarious little parody on Thursday. And truly, it feels like an extra special gift for this bizarre holiday season.

In the sketch, Rudd plays Casey Homegoods, who is directing a HomeGoods commercial featuring two frequent shoppers, moms Evelyn and Eileen, played by Aidy Bryant and Kate McKinnon. The two women are in-laws, and are meant to share what they would like for Christmas. HomeGoods wants to give “real moms what they actually want.”

At first they both demur, “Oh nothing, I’m not fussy. Don’t spend too much money,” the usual response so many of us give. When pressed, they finally answer. “Grandchildren.”

When Rudd explains to the two women that HomeGoods can’t actually sell grandchildren, McKinnon responds, “that sounds like a ‘you’ problem,” while Bryant adds, “can you check in the back?” They eventually wear Rudd down, convincing him that, even though he has no children of his own, “Oh my god, I want grandchildren. Grandchildren are amazing. They don’t blame you for anything.”

Eventually, Bryant received a phone call from her daughter Kelsey saying she’s pregnant, and the three of them all scream “We did it!” and celebrate with a hug.

It’s no secret that there is often a special bond between grandchildren and grandparents, of course. And this skit perfectly nails why so many grandparents are desperate for little ones to spoil.

Saturday Night Live has made a name for itself with its holiday sketches targeting moms and family life over the years. Remember last year’s “Christmas morning” music video from last year? Where everyone gets amazing gifts and the mom gets a robe. That’s it. And they left the 40% off sticker attached. Then there’s the “Holiday Jewelry” commercial from 2017, when all the moms get charms from Pandora where they “take one little fact about your wife, and turn it into jewelry.”