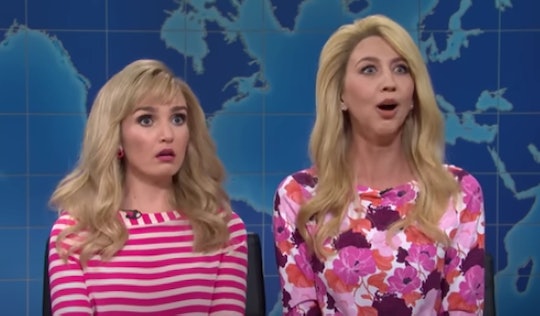 “Old witches? Snacking on my kids? Not under my house.”

To say that Texas mom of three Jamie Gooch is not a fan of Hocus Pocus 2 is a gross understatement. Gooch recently took to Facebook in a since-deleted post to warn other parents of the dangers of allowing their children to watch the Disney+ movie for fear it would bring Satan and witchcraft into the homes of people watching it. Now, Saturday Night Live has spoofed the video with Chloe Fineman and Heidi Gardner playing moms who simply will not stand for witchcraft being brought into their homes via Hocus Pocus 2. Or Sour Patch Kids, in case you were wondering.

Gooch spoke to local station KWTX recently about her Hocus Pocus 2 concerns and why she doesn’t think parents should be allowing their kids to watch. “A worst case scenario is: you unleash hell on your kids and in your home,” the mom told the station. “The whole movie is based on witches harvesting children for blood sacrifices.” She explained that the characters in the movie, who might seem “fake and innocent,” could actually be casting spells through the television. “Anything could be coming through that TV screen into your home.”

And with this, a new Saturday Night Live skit was born.

Fineman and Gardner visited Michael Che on “Weekend Update” as concerned Texas moms Debbie Hole and Stacey Bussy. Their mission? To warn people about Hocus Pocus 2. “Witches? Snacking on my kids? Not under my house!” said Bussy, adding that she did not need to see Bette Midler, who plays Winifred Sanderson, “wearing big old teeth.” The two moms, much like Gooch, believed that the movie could “unleash Hell,” explaining that Satan could just be walking around in everyone’s living rooms because of the movie.

Sadly, these two didn’t even need to be watching Hocus Pocus 2 to have Satan enter into their lives. Poor Debbie became briefly possessed on stage just from talking about the movie. So now you know.

Interestingly enough, Kathy Najimy (Mary Sanderson) was initially concerned about the portrayal of witchcraft in the original 1993 version of Hocus Pocus for a different reason. She wanted to make certain real women who practiced witchcraft were not being misrepresented. As for the child-eating rumors about witches? Najimy had an explanation for that one from none other than Gloria Steinam. “Some of the original women who were said to be witches were health care workers and midwives, so that’s where the notion of baby-eating came because they performed abortions sometimes,” she explained in a 1993 interview.

So now we know the story behind the myth. Maybe someone should tell any concerned parents so their kids can also enjoy Hocus Pocus 2.