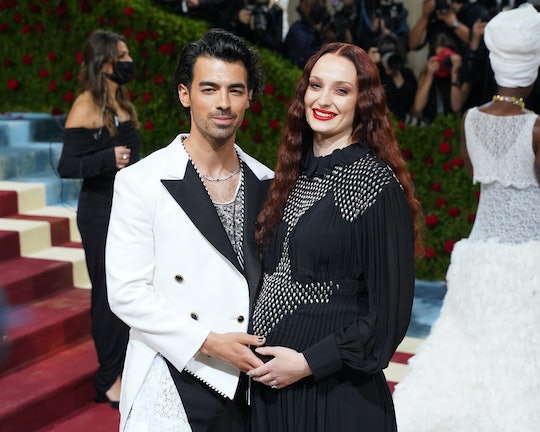 After debuting her baby bump at the 2022 Met Gala (and dominating the red carpet in a stunning floor-length Louis Vuitton gown), Sophie Turner has opened up about her motherhood experience. The Game of Thrones star, who is married to Joe Jonas, is mom of Willa, 1, and is pregnant with her second child, stays as private as she can, only occasionally posting on Instagram or talking about life at home. But the actress recently revealed one universal truth about being a mom in the cover interview for the June 2022 issue of Elle UK — and it is so, so relatable.

Turner’s life may seem exciting as she acts (her new show, The Staircase, is streaming now on HBO Max), serves as an ambassador for Louis Vuitton, and jets around with her pop star husband. In reality, though, she’s just like any mom.

“I used to be so rock ‘n’ roll and spontaneous,” she told Elle. “I’m sure there’s a part of me that’s still like that, deep down. But becoming a mum, you just become way less cool. I’m like an old woman.”

The 26-year-old actress first rose to fame at 15 years old, playing Sansa Stark on the popular fantasy series for which she was nominated for an Emmy award. She’s had a busy career since, starring as Jean Grey in X-Men: Apocalypse among other things, so it’s no wonder she feels older now. In the interview with Elle, she said about her time on Game of Thrones, “The producers, runners, and actors raised me, alongside my parents, but they raised me more in a business sense and to be an independent working woman. It was a very formative time in my life. At 16, I felt like I was a fully-fledged adult.”

Now that she has a toddler and a baby on the way, she feels even older compared to her non-parent friends. “When my friends come around, I’m like, ‘Oh my God, you guys keep me so young,’” she added in the interview with Elle. “We’re all only 25 or 26. I have to remind myself that I’m in my mid-twenties. I’m a child.”

Of course, she still looks glamorous. She shared behind-the-scenes photos getting ready for the Met Gala with Vogue, showing off her “powerful, strong, and yes, feminine appearance.” She wore gorgeous jewels and Louis Vuitton slides to stay comfortable and gorgeous on the red carpet.

Motherhood has another benefit: making her a more empathetic actor. In an interview on the UnWrapped podcast on April 28, she talked about motherhood with actress Isla Fisher, who has three kids with actor Sacha Baron Cohen. Turner shared how becoming a mom has affected her career. “The empathy is heightened,” she said about acting now. “The feelings about family are just, like, overflowing.”

Even if she doesn’t feel cool anymore, being a mom makes the Queen of the North even cooler. Being spontaneous is overrated, anyway.