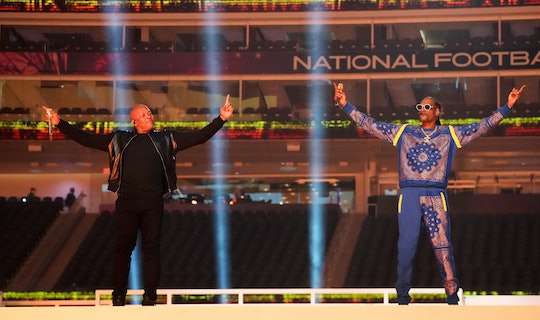 The Super Bowl 2022 Halftime Show Was Black Excellence On Display

If you’re a ‘90s kid (and a hip-hop head), then you got your crip walk on with Dr. Dre and Snoop Dogg tonight. The highly anticipated Super Bowl 2022 halftime show did not disappoint. And it’s arguably one of the best moments in halftime history. Don’t debate me.

Here are a few of the highlights...

Dr. Dre, a rapper, musician, and producer, has so many classic hits, and we got to vibe to a few of them back to back. And the memories of where you were when you first rode out to these beats probably flooded your living room (or wherever you’re watching the game).

Snoop Dogg, whose musical journey is full of smooth rhymes we still bounce to, stepped out in all his swagger. The D-O-double G took us from level to level of west coast flavor.

And did you see 50 Cent enter upside down? Yea, so da club was definitely in the living room tonight. Good thing the kids were in their room.

Mary J. Blige does not age, and that’s not up for debate. I don’t care how good your life is when she sings No More Drama like every woman who has been through the relationship wringer, you feel like you’re fighting for your peace all over again. And you’re singing at the top of your lungs!

Eminem, the rapper's rapper, who started his career with a fire beat by Dre (Hi My Name Is), lit the stage with his score from his movie 8 mile. Slim Shady, the white rapper’s alter ego, has always had a lyrical style that hops over beats in a mind-boggling way. But the height of his set was when he took a knee in respect for Colin Kaepernick, in a tribute to the former football player’s choice to peacefully protest against racism.

And Kendrick Lamar... Dressed in all black with green sashes that read Dre Day, Black excellence and talent were on full display. When Lamar hits that first line to We Gon Be Alright which is, “Alls my life I has to fight,” the culture lights up to another anthem of our perseverance and determination to live without oppression.

If you missed it, you can download the Pepsi Super Bowl Halftime Show App to check it out or rewatch to get your crip on again.

More Like This
Janet Jackson's Son Eissa Is A Little Musical Prodigy In The Making
Ciara’s Kids Make The Sweetest Cameo In Her New Song “Treat”
Catherine Reitman Calls It Like She Sees It: “Being A Working Mother Is Impossible”
Sarah Michelle Gellar Is Facing A Terrifying Parenting Milestone: Sleep Away Camp