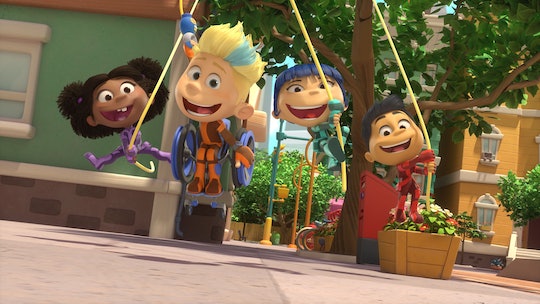 The new children’s series follows a group of kids doing good deeds or “zenkos” in secret.

Imagine if the puppies from PAW Patrol were actually human children who were stealthy like ninjas and wanted nothing more than to run around doing good deeds without expecting any thanks in return. This is what you’ll get in Romper’s exclusive look at Team Zenko Go!, a new animated children’s show coming to Netflix in March 2022. The new series from DreamWorks follows four young friends using their special skills to distract people while they do good deeds.

In Romper’s exclusive clip from the first episode of Team Zenko Go!, Auntie Yuki (D’arcy Han) calls the team together for Mission Mode. She needs Niah (Nakai Takawira), Ari (Hartley Bernier), Ellie (Penelope Good), and Jax (Dominic Mariche) to go into stealth mode in order to help the citizens of Harmony Harbor. When Auntie Yuki sounds the gong, essentially their version of the Bat signal, the team rushes to mission control (which appears to be a food truck that springs to life when the team arrives) to find out who needs help. In this case, it’s a young girl named Lulu who needs help presenting a comic book at her book club. Her comic book goes missing, and Team Zenko, which is a Japanese word meaning good deed, are in charge of finding it for her. Without her knowing, of course, because as Aunti Yuki reminds them, “the best zenkos are the ones nobody knows.”

Check out Romper’s exclusive clip below:

Team Zenko Go! really builds on this theme of making the world a better place simply by helping people without them knowing. While the premise of the show, a group of kids who suit up in costume to go out in the community on secret missions, might seem fairly familiar, it’s the stealth element of Team Zenko Go! that really sets it apart. Unabashedly kind, focusing on the concept that “no good deed is too small,” Team Zenko Go! not only encourages kids to be kind but actively reminds them to do so without recognition. A tall order indeed, asking kids to do good deeds or “zenkos” in secret. But Team Zenko Go! seems to have found a way to make it work.

Check it out with your kiddos when Season 1 of Team Zenko Go! drops on Netflix on Tuesday, March 15.