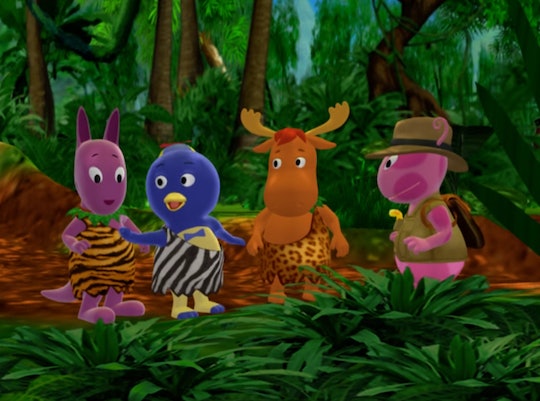 The Backyardigans On Nick Jr. Is Behind These Viral TikTok Songs

That’s right, “Into the Thick of It” and “Castaways” are from The Backyardigans, which aired on Nick Jr. from 2004 to 2013. And while the show hasn’t aired new episodes in years, both song have since gone viral and climbed the Spotify charts.

Both Viral Songs Come From Season 1

“Into the Thick Of It” comes from the second episode, “The Heart of the Jungle” in Season 1 of The Backyardigans, which focuses on five animal friends who go on adventures to imaginary places in their own backyard, using music and song to help aid them in their fun.

Meanwhile, “Castaways” can be heard in episode 11 from that same season, where the group believes they are stuck on a deserted island. The lyrics to “Castaways” are simple and effectively explain how it feels to be stranded on an abandoned island. “We’re stuck where we are with no house, no car!” the Backyardigans sing. “Castaways ahoy!”

The Songs Have Gone Super Viral On TikTok

Both songs have become sort of a phenomenon on the app. With “Into the Thick Of It,” TikTok creators and celebrities like Lizzo come up with cute little dances or use it as background music for strange tasks like unsuccessfully pulling down a tree with a car.

“Castaways,” on the other hand, has become the soundtrack for hilarious animal videos, and has too, become a dance trend (because this is TikTok, after all). YouTuber and comedian, Colleen Ballinger, for example, came up with her own samba dance to “Castaways.”

McPaul Smith, the lyricist behind the songs on The Backyardigans told BuzzFeed that they are happy that these songs are having a resurgence on TikTok. “Who knows, maybe this is something that will last, like, another 10 minutes, but the fact that it makes people aware that there’s some really beautiful work that was done for the show, I think that’s a good thing,”

The Backyardigans Is Streaming On Paramount+

Not only can you hear these two viral TikTok songs, but so many others in each episode of The Backyardigans, which is now streaming on Paramount+. CBS and Viacom’s streaming service has the first two seasons of The Backyardigans; each episode is less than 30 minutes long and contains at least one song that will get stuck in your head. In the meantime, put your own spin on the songs. There’s already a Little Einsteins and Migos remix of “Into The Thick Of It,” so the possibilities really are endless.