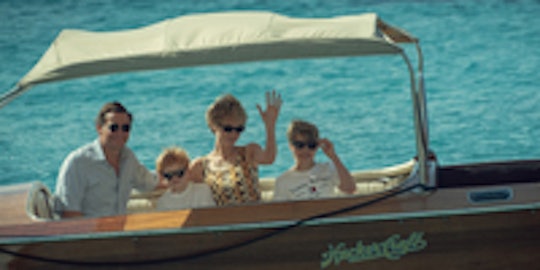 The palace says it’s “a drama not a documentary.”

Season 5 of The Crown promises to be its most relevant season yet. The Emmy award-winning series that has dramatized historical events in the lives of the British royal family will be set in the ‘90s this time around. A time that was fraught with turmoil and still resonates decades later. And a first look at cast photos from The Crown this season serve as a reminder of how that decade changed everything for the Windsors.

The Crown is a “drama, not a documentary.”

This new season of The Crown comes after the death of Queen Elizabeth at the age of 96 years old in September. Considering the series has been dramatizing the royal family from her perspective since Season 1, which focused on her ascension to the throne after the death of her father, Season 5 of The Crown has a bit of a feeling of melancholy surrounding it. Peter Morgan, the creator of The Crown, asserted that the series had been made as “a love letter” to Her Majesty and paused filming after her death out of respect for her.

Even so, a senior member of the royal family stressed ahead of the release of this season that the series is a “drama not a documentary,” marking one of the first time’s the palace has offered an official statement on the series.

Some time has passed and Netflix released several photos from the upcoming season. Here’s a look at what we can expect.

Queen Elizabeth and Prince Philip in The Crown.

Queen Elizabeth will no longer be played by Olivia Colman in the new season of The Crown, instead the role has been taken over by Imelda Staunton of Harry Potter fame. Jonathan Pryce has taken on the role of Prince Philip in the new season and let’s face it; they both look basically perfect.

Lesley Manville plays Princess Margaret in the new series, taking over from Helena Bonham-Carter in the previous season. A character Manville told Hello! she struggled with at first, “I’m a working-class girl from Brighton, so the territory of Mrs. Harris is kind of in my bones whereas (Princess Margaret is) the other end of the social scale — and let’s face it, you couldn’t get more aristocratic than the royal family.”

Elizabeth Debicki has been tasked with playing Princess Diana in the fifth season of The Crown, and the first look at her as the Princess of Wales is almost eerily on point during her final years before she died in a tragic car accident. The way she holds her head, that heartbreaking look of vulnerable loneliness in her eyes. It’s such a portrait of the princess at a time when she was dealing with her very public divorce.

Prince Harry and Prince William get their moment.

The Crown shared a photo of Debicki as Princess Diana alongside Dominic West as Prince Charles and perhaps most amazingly, Princes Harry and William. Timothee Sambor will play Prince William, while Teddy Hawley has been cast as a little Prince Harry.

Prince Charles is pictured alongside Camilla Parker-Bowles, played by Olivia Williams. This is the era when the couple’s longstanding affair was brought to light in the public, leading to his divorce from Princess Diana.

Finally, Claudia Harrison will take over the role of Princess Anne in season 5 of The Crown.

Season 5 of The Crown starts streaming on Netflix on Nov. 9. And you know it’s going to be a good one.