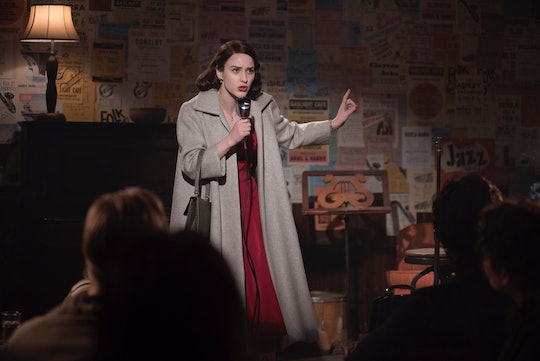 The Marvelous Mrs. Maisel Is Getting A Fifth & Final Season

It will be the last hurrah for Midge.

Mrs. Maisel has been on one heck of a wild ride since we first met her back in 2017. From being happily married to Joel, to broken-hearted, to discovering her passion for comedy, to hitting the road as a comedian, she’s kind of been everywhere. And it seems she’s not finished yet. On the eve of the premiere of the fourth season of The Marvelous Mrs. Maisel, creator Amy Sherman-Palladino and her executive producer husband Daniel Palladino announced that a fifth season is in the works.

[Warning: spoilers ahead for Season 3 of The Marvelous Mrs. Maisel.]

Season 5 is currently under way in New York

After the fourth season was delayed due to Covid-19 restrictions, it is finally set to be released on Feb. 18. It has been almost three years since the third season dropped in 2019, so fans are anxious to see what the new season has to offer. Season 3 saw Midge (Rachel Brosnahan) cut loose from her gig as an opener for Shy Baldwin after she performed at The Apollo, Susie (Alex Borstein) burn down her dead mother’s house for insurance money, and Joel (Michael Zegen) open his new club. A lot was left hanging in the air.

Fortunately, the wait will not be as long for the fifth season. According to The Hollywood Reporter, Season 5 of The Marvelous Mrs. Maisel has already begun filming in New York City.

The fifth season will be the swan song for Midge

Midge will be back for one more season.

Amazon announced on Thursday that the upcoming fifth season of The Marvelous Mrs. Maisel will be the last. “The dozens of awards cement Maisel’s legacy in many ways, but what’s even more enduring and poignant are the characters Amy created and the joyous, brilliant, singular world she and Dan brought to life,” Jennifer Salke shared with The Hollywood Reporter in a statement. “This series has meant so much to Prime Video and the effects of its success will be felt long after its final season. I can’t wait for fans and our worldwide Prime Video audience to savor each moment as we embark on the culmination of this groundbreaking and unforgettable series.”

The final season might be sooner than you think

While no release date has yet been set for the fifth season, the original three seasons were released in 2017, 2018, and 2019. Which could mean the final season of The Marvelous Mrs. Maisel might be released in 2023 if the showrunners follow their original timeline.

What can we expect?

For one thing, I think we can assume that there will be more gorgeous fashion and amazing set design on The Marvelous Mrs. Maisel as we’ve come to expect. But what about closure? Will we have resolution on the whole will they/won’t they with Midge and Lenny Bruce? Will Rose become a professional matchmaker? Will Ethan and Esther grow up and become sullen teenagers or will they remain shadowy figures in the lives of their parents?

Back in 2019, Daniel Palladino and Amy Sherman-Palladino told TV’s Top 5 Podcast,“We have an idea emotionally where we want the Midge character to end. We don’t know exactly how long it’s going to take. The first year was her discovery, the second year things unravel, the third season she goes on tour.”

In other words... it’s all up in the air. How exciting.

Where can we watch?

All you need is a subscription to Amazon Prime to watch The Marvelous Mrs. Maisel. So get it while you can... because now we know. Soon enough the final curtain will close for Midge.